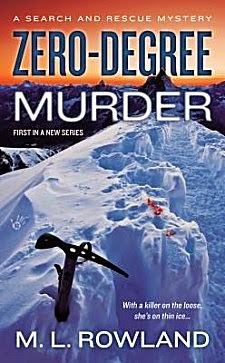 First Line: The body hung upside down in the truck, suspended by the seat belt, sun-bleached hair skimming the roof of the cab.

Anyone who works emergency services knows that call-outs on holidays can happen, so when the Timber Creek Search and Rescue team gets called out on Thanksgiving, volunteer Gracie Kinkaid packs up her gear and heads out.

Part of a film crew has gone for a hike in these mountains an hour east of Los Angeles, and four of them haven't returned. Due to the holiday, only three Timber Creek S&R team members have shown up so far, but there's a storm moving in. With the safety of the hikers in jeopardy, they can't wait. Ralph Hunter stays to be in charge of the command center while Gracie and partner Steve Cashman head out to find the hikers. The two do find one hiker, world famous actor Rob Christian, but he's injured. With the weather getting worse, Cashman sets out with the only radio to get help.

Alone in the mountains during a blizzard with an injured man, Gracie is going to have to use all her expertise to keep them both alive because the weather isn't her only problem. There's a ruthless killer out there determined that no witnesses to his crimes will be left behind.

I am a long-time Nevada Barr and Anna Pigeon fan. I love the outdoors, strong female characters, and survival tales. Zero-Degree Murder satisfied all these cravings of mine. Gracie is a complex character. She's smart, she's brave, and I definitely want her on my team the next time I head out for the middle of nowhere. That woman knows how to pack and how to track. She's also a bit of a puzzle. Why would someone so smart and capable insist on working a series of dead-end jobs that are well beneath her abilities? The author slowly answers this question throughout the book.

Outdoors fans are going to love the setting-- high mountains, treacherous terrain, and deadly weather. Watching Gracie handle all this the old-fashioned way is a treat. Rowland does an excellent job of creating tension, and her sense of pace is spot on. Moreover, she not only surrounds her main character in mystery, the killer's identity and motivations are hidden from view for much of the book. What glimpses of the killer Rowland lets us see heighten our sense of danger and urgency.

All in all, I was thrilled with this book. The only small quibble I had with it is that-- although I know it's done for the benefit of Gracie's character-- the relationship that springs up between her and the actor seemed unnecessary. Like I said, it's a very small quibble, and I can't wait for the next book in the series. There's more to learn about Gracie, there's more to learn about Ralph... and there's definitely more adventure to be experienced. If you're a Nevada Barr fan like me, I think you're going to love this book.