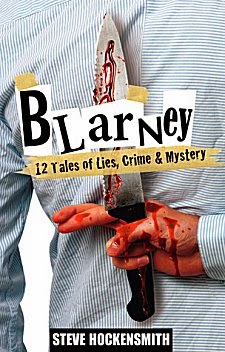 First Lines (from Introduction): I'd like to think I'm not a bloviator, backslapper or braggart. But I do know a thing or two about blarney.

After reading several excellent high tension books in a row, I was in need of something good and something fun. That's when I remembered that I'd found yet another Steve Hockensmith short story collection, and all I had to do was grab my Kindle and find it. Once again, this author did not disappoint.

Gathered together after being published in various magazines and anthologies (and being nominated for-- and winning-- awards along the way), these twelve tales run the gamut of emotions and situations. For me, the weakest of the lot was "Fred Menace, Commie for Hire" about a Communist private investigator. Menace certainly knows how to wisecrack his way through dangerous situations, but I've never been a fan of the Humphrey Bogart-style gumshoe. In "The Case of the Unfortunate Fortune Cookie" we learn why fortune cookies no longer contain real fortunes, and in "The MacGuffin Theft Case" there's a very amusing answer to why pizzas are round.

Ex-cop turned private investigator Larry Erie stars in six of the twelve stories. "Erie's Last Day" lets us see how Erie spends his last day before he retires from the police force, and succeeding stories show him in retirement and then some of the cases he gets when he's persuaded to become a P.I. Erie is a marvelous character, and I would love to see him in a full-length novel. (Come on, Steve-- geriatric sleuths are In!)

The best story of the lot-- the one that tugs at your heart and really revs up your brain cells-- is "Didn't Do Nothing" about an innocent young man caught in the middle of a Chicago drug war. I would tend to be suspicious of anyone who could read this and be unmoved by it.

Based on my reading his Homes on the Range historical mysteries and his short stories, Steve Hockensmith has rapidly become one of my favorite crime fiction authors. I never used to be a fan of short stories, but this man is almost single-handedly changing my mind. He just might change yours, too. Give him a try-- You don't need an eReader; this collection is in print, too!

Short Stories
Rating: A
Source: Purchased as an eBook from Amazon.