@ The Poisoned Pen with Dana Stabenow! 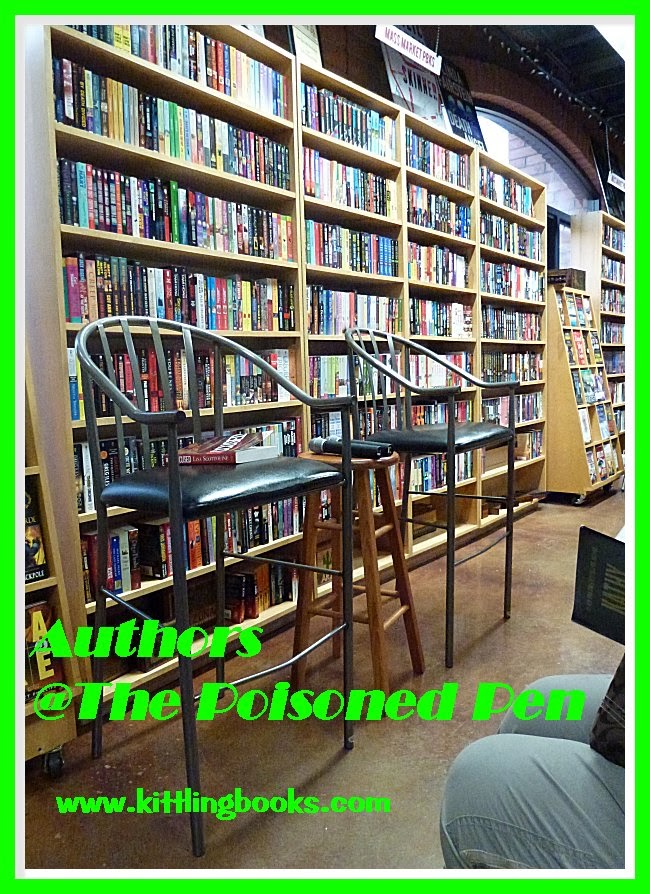 If it's Saturday, I must be going to my favorite bookstore, The Poisoned Pen. At least, it was beginning to feel that way. Lately the author events have been held on days that Denis works, but I knew that sooner or later, we'd get lucky and he'd be able to come with me. Right now I had more pressing business on my mind: Dana Stabenow was going to be talking about Everything Under the Heavens, the first book in a trilogy that bookstore owner Barbara Peters had encouraged her to write.

I had seen Dana several times-- attending The Poisoned Pen Conference one July and coming to the bookstore for other authors' appearances, but this was the first time I'd be in attendance when the spotlight was on her. I'd already come to like her sense of humor, her knowledge, and her enthusiasm, so I was really looking forward to the evening.

I made my purchase then chose a seat and sat down to read. The floorspace had been set up to view photos on a large screen, and after chatting with Ariel while she perfected the positioning of all the equipment, I settled down with my book.

The event began with Dana asking us a favor. Her 84-year-old Aunt Pat had recently had cataract surgery and was back to knitting, beading, and reading... would it be all right if Dana were to video us waving and saying hello to her aunt? Of course we didn't mind, so the short video was taken, and Dana immediately sat down to post it to her Facebook page.

While she did that, Barbara Peters, dressed in a beautiful Burmese longyi and Thai silk scarf, kept an eagle eye on what Dana was doing.  "This woman is sneaky," Peters said. "If you don't keep an eye on her, she'll take a photo of you and post it somewhere!"

While Dana finished up, Barbara showed us how to wrap a longyi so it would stay up, and then they both began to reminisce. "My very first public appearance was at this little store in Scottsdale (the original Poisoned Pen building), and I was absolutely terrified." Dana told us. "Barbara had to shove a chair under my butt before my legs gave out!"

Barbara laughed. "The only person I've seen who was even more scared at his first public appearance was Michael Connelly!"

Once again, Dana's enthusiasm and bubbly personality were putting big smiles on everyone's faces. No wonder the staff had to bring in more and more chairs!

Everything Under the Heavens

Talk immediately shifted to Dana's new book, the first in a trilogy, which tells the story of Marco Polo's granddaughter traveling west on the Silk Road. Dana was instantly smitten with the man when she read The Travels of Marco Polo. As it turns out, Marco Polo was quite the ladies' man. This trilogy is something that the author wanted to write for a long, long time. "I did a ton of research, a ton of travel, and everything I posit could have happened," she said.

Originally the trilogy was intended to be a digital release only, but "Barbara got all whiny and said 'But we won't have a book for you to sign in my store!' Barbara not only encouraged me to write these books, she's responsible for them being published in physical copies," Dana told us.

Then the slideshow began. On traveling in China on a camel, Dana remarked, "Very hot and very smelly!" Fruit and nut markets, cones of sugar, silk merchants... one exotic and fascinating scene after another passed before our eyes.

Dana told us of watching a mule being sold. Each person in the large buying party test rode the mule before having a confabulation. Dana brought the scene in the photo to life as she told us about it.

This story led her to tell us about her discovery of splash guards in Venice. (If anyone wants to know about them, leave me a comment at the end of this post.)

Chartres Cathedral in France had just been finished when her characters go through the area. "Chartres is the most amazing place!" Dana exclaimed. "I've been there three times, and I'd go back again in a heartbeat!" Dana Stabenow's enthusiasm for history and for travel is contagious. I think most of us wanted to board the next planes for China and France.

In telling us a bit more about the Polos, Dana stressed that they didn't blaze any trails; the routes they traveled had already been in use for centuries, and-- although they did travel on the Silk Road-- they did not bring silk back with them. It was already in cultivation in Europe at that time. Another important thing to realize when reading the book is that Marco Polo is merely background; it is really his granddaughter's story.

"You mention fermented mare's milk in the book," Barbara Peters said. "Does it taste like yogurt?"

When Barbara told us that she thought we were all going to love the horse in Everything Under the Heavens, Dana had a confession to make: "I was inspired by the horse in the film Tangled!"

Dana is going to be concentrating on the next two books in this trilogy. "The story is basically all planned out, and I don't think it's going to change," she said. Heartfelt groans were heard throughout the building when we were told that the next Kate Shugak book is scheduled to be released in February 2016.

When asked how she chose the subject matter of Everything Under the Heavens, Stabenow replied, "I've always been fascinated by trade and markets. I think it has something to do with where I live in Alaska. I have to drive 220 miles to shop at the nearest Costco."

She made the decision to break the story into three books because "I hate huge books. They're too hard to hold, and I literally can't get to sleep unless I read."

Dana had to send Everything Under the Heavens back to be redone because the original had text in the gutter. (What's the gutter? It's the inside margins or the blank space that is between two facing pages. I can see where text in the gutter could be a problem, don't you?)

Another fan asked her about Storyknife, the writers retreat for women that Stabenow is creating on land she owns in Homer, Alaska. "I'm waiting on government approval," Dana said.

Another comment was made about the weather. "Yes-- there's no snow in Alaska. What's up with that?" she said.

Dana has attended the writers conference in Homer, but she doesn't intend to do it any longer. "I do my best to stay out of the public eye while I'm home."

In answer to the last round of questions, Dana told us that her high school English teacher encouraged her to write and pointed her towards a career in journalism. "If you hold my feet to the fire, I'll tell you that Nevil Shute is my favorite author." Dana also writes marvelous book reviews and told us, "I love to turn people on to Goodreads!"

We all had such a wonderful time. Even if you haven't read any of her books, I'd highly recommend that you go to see her if you get the chance.