The Ways of Evil Men by Leighton Gage 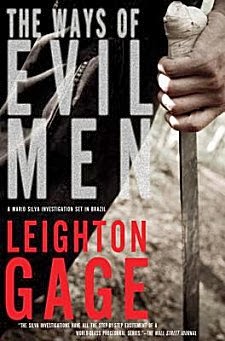 First Line: Sunrise is a brief affair in the rainforests of Pará.

In the town of Azevedo in the remote Amazon jungle, the only person who is mourning the death by poison of 39 of 41 members of the Awana tribe is Jade Calmon. As the official tribal relations agent assigned to the area, Jade had been learning the language and customs of the tribe and getting to know the people. She is determined to get justice for the two remaining members of the tribe; however, racism is a way of life in the area, and it's not until she contacts friends in Brasilia that something begins to be done.

As a chief inspector in the Brazilian Federal Police, this isn't the first time that Mario Silva and his team have had to deal with tribal genocide, but their investigation in Azevedo has barely begun when a local white man is murdered and all the evidence seems to point to one of the surviving Awana. With a town about to erupt in violence, Silva and his team have to work fast.

Reading The Ways of Evil Men was bittersweet. I have been a tremendous fan of the Chief Inspector Mario Silva books since the very first one, Blood of the Wicked. But with author Leighton Gage's death due to pancreatic cancer in 2013, it was tough knowing that this is the last book in a truly remarkable series. Each book is a seamless blend of police procedural, character study, and social commentary. I can think of no other series in crime fiction that gives such a heartfelt and unflinching portrait of a country than Gage's.


The State of Pará was Brazil's modern-day equivalent of the old American Wild West. Life was cheap; violence, rife; ignorance and poverty, endemic.

By setting his book in a place that is identifiable to anyone remotely familiar with the American Wild West, Gage lets us know that the past isn't always past. Horrible things are still happening around the world in a daily basis, and in an area where travel is difficult and distances vast, it is a simple matter for those in charge to do whatever they like. City people aren't going to care what's happening almost a thousand miles away in a place no one's heard of. What difference does it make that a tribe has been almost completely wiped out? There were only 41 of them anyway.

The characters Leighton Gage created are the type of city people to whom such atrocities matter. All it takes is one person who refuses to accept the status quo, and in The Ways of Evil Men, that one is tribal agent Jade Calmon. She knows her limitations, but she will not quit, and it's her lucky day when Silva is assigned to the case.

Silva is another person whose moral code will not let him rest, and he's assembled a team cut from the same cloth. In many ways, he's the Marshall Matt Dillon or Sheriff Walt Longmire of Brazil. If he sees something wrong, he's going to fix it. If he has to work around corrupt or lazy officials above him in the food chain, that's exactly what he'll do, and he does it with grace, style, and a dash of humor.

Silva is the man you want on your side, and as I followed him through this investigation-- as I've followed him through six previous books-- it reminded me of how fortunate the world is that people like Calmon and Silva really do exist, and that writers like Leighton Gage tell us about them. Certain events in The Ways of Evil Men show us new, exciting directions in which the author was planning to take the series, and they will forever remain speculation amongst his fans. Some of the color went out of the world when Leighton Gage died, but his literary legacy is pure gold. I can't recommend his books highly enough.