The Square of Revenge by Pieter Aspe 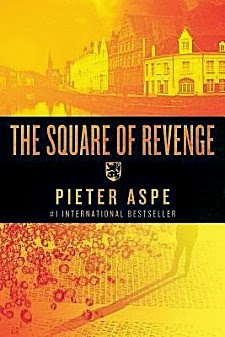 Belgian Detective Inspector Pieter Van In is assigned to the break-in at the Degroof jewelry store in Bruges. It's a strange case: nothing has been stolen, but all the jewelry has been dissolved in an acid so strong it can melt gold. There's also a scrap of paper with a strange little square on it that's been left in the empty safe. Van In looks forward to proving himself with this case, but he didn't anticipate having the ambitious district attorney Hannelore Martens following his every move.

Van In's attention soon turns from the robbery when other members of the Degroof family begin receiving messages that also contain that strange little square. The investigation goes into high gear when a grandson is kidnapped and held for ransom. The further Van In searches for clues and evidence, the more he learns that the Degroofs have something to hide.

I looked forward to reading The Square of Revenge for its setting in a medieval city and for my first experience with a police procedure set in Belgium. Unfortunately the book is a bit uneven. The setting in the ancient city of Bruges did not disappoint; it adds depth to the story. The characters were another matter.

Pieter Van In is a bit puzzling. He's eager to take on the Degroof investigation so he can prove his ability to solve a high-profile case, but very little is said or done about his inexperience after the opening pages-- probably because he does not behave like a fledgling inspector. He's got the usual set of problems: acrimonious divorce, crippling mortgage, no car, etc. Two character traits in particular astounded me: Van In imbibes too much alcohol at very inappropriate times (like in the home of a suspect he's interviewing), and he is much too easily distracted by a pretty female. Show a little leg, flash a smile, brush your chest lightly against his arm, and his brain goes into meltdown. These traits did not endear him to me in the slightest, but perhaps they're meant to show his inexperience.

District attorney Hannelore Martens is first described as a politically ambitious woman who knows how to get her way, but when brought together with Van In she rapidly turns into a pretty little sidekick who likes to drive fast. We never really get to see her as the master manipulator she's supposed to be.

The story also had its problems. The pacing was deadly slow for the first third of the book. It took me no time at all to understand why Degroof was being targeted, and from that point on I hoped for the worst to happen to him.  Access to security codes, the type of ransom being extracted from Degroof, and other details didn't quite add up.

All in all, I felt the book had promise, but a lackluster delivery. Did the translation have anything to do with that? I honestly don't know. I've also realized that The Square of Revenge does not hold up well in my memory. The longer I'm away from it, the less I like it, which bodes ill for my continuing to read the series. Would I recommend it? Yes, but with strong reservations.