The Poisoned Island by Lloyd Shepherd 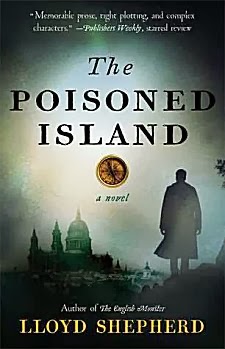 First Line: Near the foot of great Tahiti Nui, in the shadow of the dead volcano and beneath the hungry eyes of ancient gods, the young Englishman chased his princess through the forest, despite the best efforts of the forest to stop him.

It's the year 1812, and the Solander has just tied up to the London docks laden with plant specimens from Tahiti for Kew Gardens. From all accounts, Sir Joseph Banks is well pleased with the voyage he commissioned, but when sailors from the ship start dying, it's up to John Harriott, magistrate of the Thames River Police, and Constable Charles Horton to investigate these crimes and put an end to the killings.

Once again Lloyd Shepherd has written a deftly plotted and richly detailed book that will bring all your senses to life. Part murder mystery, part social commentary, The Poisoned Island is filled with creepy atmosphere, intriguing characters, and one very puzzling mystery. Although Harriott and Horton appear in Shepherd's previous book, The English Monster, both books can easily be read as standalones.

In The Poisoned Island, there are several flashbacks to past voyages to Tahiti, especially in 1769. The island, the weather, the native people, the plant life... everything has combined to form a paradise that lives on in the minds of those who have been there-- and once they've been there, they want to go back. Unfortunately the fabric of Tahitian life is ripped apart as European customs and behaviors spread like poison. But Tahiti isn't the only island that has been poisoned.

Constable Charles Horton is a marvelous character who feels tainted by his past, but he's found the perfect wife to love and support him-- and she isn't the frail flower that Horton likes to think she is. Horton has also fallen on his feet with his employment. Magistrate John Harriott has had the foresight to see that policing is changing; it's no longer a matter of merely having a police presence to deter villains, men who are capable of investigating crimes are the people who are needed now. Charles Horton is the perfect man for Harriott's needs, even though almost every other magistrate in London would heartily disagree.

It's a pleasure to watch these characters walk the streets and dockyards of a London that seems straight out of Dickens. Sights, smells, sounds-- Shepherd knows how to immerse readers in them all. He also knows how to put together a fascinating mystery. At first, none of crime scenes make sense. It appears that all the victims were killed in their sleep. They have huge smiles on their faces, their throats have been slashed, and their sea chests have been gone through. But how can the killer have gotten into or out of their lodgings without being seen-- and why were none of their wages taken? Horton's investigation takes him from boarding houses to pubs, from the Solander to Kew Gardens, and many other places besides, and as he begins to piece things together, he realizes that the seeds of murder were sown in faraway Tahiti.

If I have anything negative to say about this book amidst its rich language, atmosphere, plot and characterization, it's that the pace bogs down repeatedly. As it is, I can recommend The Poisoned Island wholeheartedly. If it had been trimmed and tightened a few degrees, I'd be singing and dancing and thrusting copies of it in your hands. Ah, do it anyway-- I can still feel those Tahitian breezes caressing my skin and feel the chills running down my spine as I walk the London docks at night.