Picture of Lies by C.C. Harrison 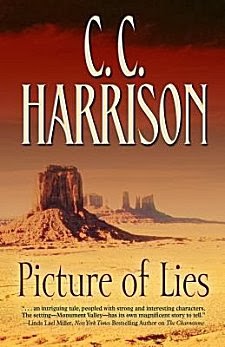 First Line: This was supposed to have been a make-up vacation.

Since investigative journalist Keegan Thomas's little daughter Daisy was kidnapped, she's been trying to bury herself in work to avoid thinking about the nightmare her life has become. Now she's facing burnout.

Keegan decides to take some time off to go to Monument Valley to put some names to the faces in an old photograph that was found in her grandfather's belongings after his death. She's surprised when most of the Navajo refuse to speak to her, but she eventually learns that one of the children in the photograph was kidnapped by missionaries and taken to a boarding school. In trying to find out what happened to the child, Keegan will not only learn shocking truths about her family that stretch back two generations, she will be putting her life in danger.

This is one of the few times a book cover has drawn me to a particular book, and when I learned that Picture of Lies is a mystery and does indeed take place in Monument Valley, I had to read it.

I love Monument Valley, and I'm happy to say that Harrison does a good job of giving readers a feel for the vast distances and incredible beauty of the area. I also liked her portrayal of the Navajo characters in the book. I had mixed reactions to Keegan and her archaeologist love interest, Dante, however.

Dante is a handsome, intelligent, caring hunk with a deep dark secret in his past. We get to see the reason why he's hiding out in one scene, but I felt that more about this could have been added throughout the story to make him an even stronger character. The relationship between Dante and Keegan also gathers speed and seriousness a bit too quickly in comparison to how they behaved toward each other in the first sections of the book.

I found Keegan to be a mixture of girl-next-door, journalistic pit bull, and incredible naivete. When she decides to drive off across the desert not knowing where she's going (and not telling anyone what her plans were), equipped with improper clothing, very little water, and a cell phone that didn't work in the area, I just shook my head and rolled my eyes. If it sounds like I've been out in the middle of nowhere, I have, and her lack of common sense greatly disappointed me.

This isn't the only time she experiences the unforgiving nature of this place, and although I may bemoan her lack of survival smarts, these scenes do give readers a real sense of what it's like out there. When Keegan travels with one of the Navajo, the Navajo knows all the rutted tracks to the places they're traveling to; very little driving is done on paved roads. In fact, paved roads are few and far between, and when Keegan mentions leaving Kayenta and turning off on the "interstate" when heading to Window Rock, don't believe her. There are no interstates up there.

By book's end, two important plot threads are left untied, which makes me wonder about future Keegan Thomas books. With the setting, the customs of the Navajo, and a very intriguing mystery in Picture of Lies, I would be willing to read further... as long as Keegan packs a hat and plenty of water.

Thriller
Rating: B-
Source: Purchased and downloaded from Amazon.