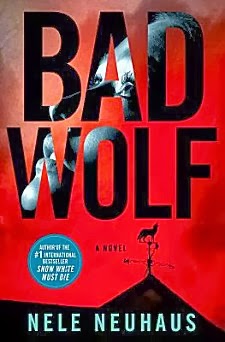 First Line: He set down the shopping bag and put away his purchases in the tiny refrigerator.

It's a hot June day, and the body of a young girl washes up on a riverbank outside of Frankfurt. Her death was brutal, and she shows signs of long-term abuse, but the investigation is hampered because no one knows her identity. Weeks later a popular television host is beaten, raped, and locked in the trunk of her car. As Inspectors Pia Kirchhoff and Oliver von Bodenstein begin digging deep into this second case, it looks as though the two cases may be related, but will they put the clues together in time to save someone close to Pia?

I can see why this series is so popular in Germany. Kirchhoff and von Bodenstein are two interesting and layered characters that I enjoy learning more about. Neuhaus knows how to craft a very complex plot with many subplots that slowly combine for a satisfying conclusion, and the translation by Steven T. Murray is excellent. However, Minotaur Books is doing something that drives me crazy: they are publishing the books in this series out of order. English-speaking readers first became acquainted with Kirchhoff and von Bodenstein with the publication of Snow White Must Die, the fourth book. The next book available to us is this one, and Bad Wolf is the sixth book in the series. A lot depends on the personal lives of the characters and their developing relationships with each other. To have the books available out of sequence means that readers following the series may be a bit confused, as I was until I did a bit of research and found out that my memory wasn't at fault. The good news is, if Bad Wolf is your first experience with Neuhaus, this isn't going to affect you at all.

This was a difficult book for me to read due to the subject matter, and if you are the type of reader who doesn't care for books that contain violence towards women and children, I would advise you to stay away. The violence is not gratuitous, but it is disturbing.

Most of the time, I love mysteries that unfold slowly, but after reading two-thirds of the book, I found that not to be the case here. At times I felt there were too many subplots-- Pia's husband has a visiting granddaughter, Pia's pregnant friend is going through a very rough time in her marriage, von Bodenstein is ready to buy a new house and start a new chapter in his life, the unidentified young murder victim, the television host who barely survived her own attack, a convicted pedophile out on parole... and more. I didn't have the slightest bit of trouble keeping all the story lines and characters straight, but I began to wonder if they were all necessary. I think my reaction may have been due to the fact that I realized very early on what was happening, and I just wanted the "bad wolves" to be put out of business. Permanently.

Although I did have a problem or two with Bad Wolf, I still enjoyed it, and I'm looking forward to reading more in the series. Neuhaus has created some marvelous characters, and it's a pleasure to learn more about them.