A Finder's Fee by Joyce and Jim Lavene 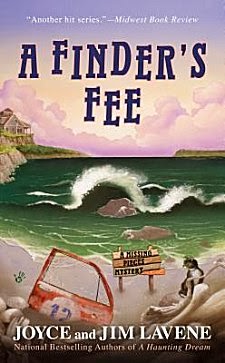 An antique amber necklace has connected Dae to the spirit of Maggie Madison, who wants her bones to be reburied so she can rest in peace, but finding Maggie's bones leads to an even bigger mystery, a mystery that dates back forty years and has ties to Dae's mayoral opponent.

Dae wants a clean campaign, but finding those remains in Mad Dog Wilson's old race car has the town divided as to her motives. To make things even worse, her grandfather might be mixed up in the whole thing. If Dae doesn't find the real killer and put Maggie to rest fast, her political career is going to go right down the tubes.

The Missing Pieces cozy series is one of my favorites. I really enjoy the characters of Dae and the man in her life, former FBI agent Kevin Brickman. Dae's impetuousness often ties in with her gift-- being able to touch objects and "see" their history-- and if this gift ever puts her in hot water, she's quick to make amends because she's a genuinely caring and honest person.

The Lavenes have created a strong story line that moves from book to book. It's not absolutely necessary to read each book in the series in order, but it certainly does help. The paranormal element is seldom overdone, which is good news for those of you who don't particularly care for that sort of thing. However, I have to admit that having Maggie Madison's spirit inhabit Dae's body didn't entirely work for me. The only time it had any real success was as comic relief. You see, Maggie had been a comely barmaid who's been away from men for a couple of centuries, so whenever Dae gets too close to a good-looking man, Maggie has a tendency to take over and get Dae in hot water. As Kevin says to Dae, "Now I know how someone feels dating a person with a split personality."

Taking care of Maggie's request and the finding of a killer is dealt with well (if not smoothly for the characters), and A Finder's Fee ends with some real cliffhangers that make me want the next book in the series in my hands right now. The Lavenes are weaving an engrossing tale centered in a small community on the Outer Banks of North Carolina and populated with a strong cast of characters. I've come to care about Duck, North Carolina and its mayor, but now I have to play the waiting game. Again.