A Back in the Saddle Weekly Link Round-Up 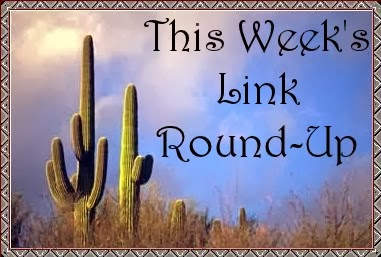 Last week was just what the doctor ordered-- a quiet, relaxing time spent in our favorite cottage up in the Mule Mountains outside Bisbee in Cochise County, Arizona (home of J.A. Jance's Sheriff Joanna Brady). We drove over to Sierra Vista for a tasty birthday/anniversary lunch, but mostly the days were spent doing things we enjoy, which included spending time with each other. I had written and scheduled blog posts for the entire week, and as a result, Denis and I spent very little time online. Now that we're back home, I want to get back to getting posts written and scheduled well in advance, but it's going to be hard. I enjoyed the blog-free week too much! Eh, I'll get back in the saddle soon... speaking of which, I'd better go rustle up two weeks' worth of links!


Whew! Two weeks is a long time to hoard links, and I hope that I've found a few that you'll enjoy. Don't forget to stop by next weekend when I'll have a freshly selected batch for your surfing pleasure!