What's New in Christmas-Themed Mysteries for 2013 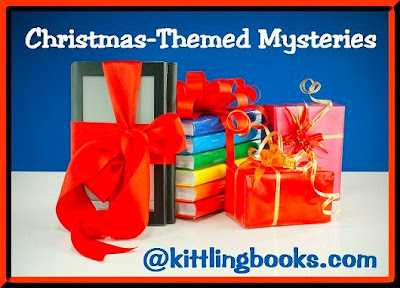 This time of year, I like to fix myself a big mug of hot Christmas tea, and curl up with a good mystery by the fireplace and all my trees. What would be better to curl up with than a Christmas-themed mystery?

I've chosen ten prime suspects, grouped them by the month they were/are released, and of course I've included all the information you'll need to find them at your favorite "book procurement locations." Synopses are courtesy of Amazon.

In this busy and wonderful time of year, please don't forget to take some time for yourself to relax and enjoy a good book. Happy Reading! 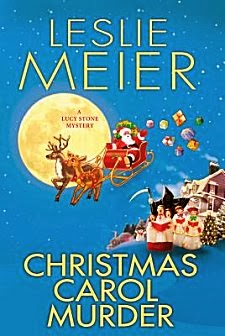 Synopsis: "Lucy Stone normally loves the holidays, but this year, Tinker's Cove has fallen on hard times. The story's not so bleak at Downeast Mortgage, whose tightfisted owners, Jake Marlowe and Ben Scribner, are raking in profits from everyone's misfortune. Half the town is in their debt, so when the miserly Marlowe is murdered, the mourners are few and the suspects are many. Can Lucy solve the case and deck the halls before the killer strikes again?" 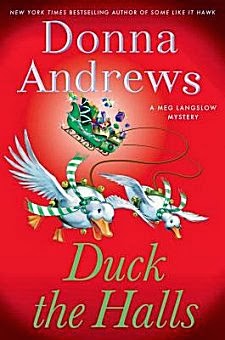 Synopsis: "A few nights before Christmas, Meg is awakened when volunteer fireman Michael is summoned to the New Life Baptist Church, where someone has rigged a cage full of skunks in the choir loft. The lengthy process of de-skunking the church requires its annual pre-Christmas concert to relocate to Trinity Episcopal, where Mother insists the show must go on, despite the budget-related protests of Mr. Vess, an elderly vestryman.  Meanwhile, when Meg helps her grandfather take the skunks to the zoo, they discover that his boa has been stolen - only to turn up later during the concert, slithering out from the ribbon-bedecked evergreens.  The next morning is Sunday, and the congregation of St. Byblig's, the local Catholic church, arrive to find it completely filled with several hundred ducks.


It's clear that some serious holiday pranksters are on the loose, and Meg is determined to find them.  But before she can, a fire breaks out at Trinity, and Mr. Vess is discovered dead. Who would have murdered such a harmless - if slightly cranky - old man?  Who has the time during the busy holiday season to herd all of these animals into the town's churches?  And will Meg ever be able to finish all of her shopping, wrapping, cooking, caroling, and decorating in time for Christmas Eve?" 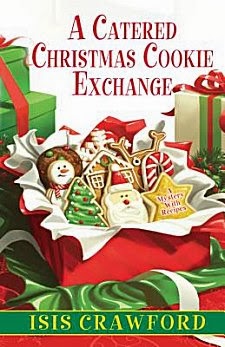 Synopsis: "The snow is falling and there's a wreath on every door in tiny Longely, New York, and that can only mean one thing: The feisty members of the Christmas Cookie Club Exchange are busy perfecting their recipes once again. And with the Baking for Life cookie contest on the line, the stakes are higher - and deadlier - than ever. Millie Piedmont is certain that Millie's Majestic Meltaways will win the competition - and when she dies in a suspicious car accident en route to the show, Bernie and Libby wonder if a rival club member may have felt the same way. Millie's niece enlists the sleuthing sisters to help her find some answers. Did someone run Millie off the road? And who stole the cookies from her car? The members of the Cookie Club appear to be grieving the loss of their friend, but Bernie and Libby start digging and are shocked to uncover a soap opera of sinister secrets and clandestine affairs. Perhaps all the back-biting, gossip, and petty jealousy were just the right ingredients to whip up a half-baked murder. Between Christmastime catering and catching a killer, Bernie and Libby may have bitten off more than they can chew. But they'll stop at nothing to get to the truth, because no holiday treat is sweeter than justice." 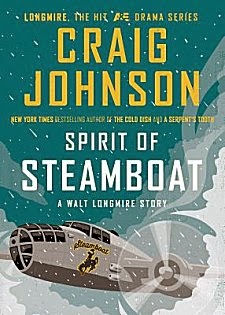 Synopsis: "Sheriff Walt Longmire is reading A Christmas Carol in his office on December 24th when he’s interrupted by the ghost of Christmas past: a young woman with a hairline scar across her forehead and more than a few questions about Walt’s predecessor, Lucian Connally. Walt doesn’t recognize the mystery woman, but she seems to know him and claims to have something she must return to Connally. With his daughter, Cady, and his undersheriff Vic Moretti in Philadelphia for the holidays, Walt is at loose ends, and despite the woman’s reticence to reveal her identity, he agrees to help her.

At the Durant Home for Assisted Living Lucian Connally is several tumblers into his Pappy Van Winkle’s and swears he’s never clapped eyes on the woman before. Disappointed, she whispers “Steamboat” and begins a story that takes them all back to Christmas Eve 1988, when three people died in a terrible crash and a young girl had the slimmest chance of survival . . . back to a record– breaking blizzard, to Walt’s first year as sheriff, with a young daughter at home and a wife praying for his safety . . . back to a whiskey-soaked World War II vet ready to fly a decommissioned plane and risk it all to save a life." 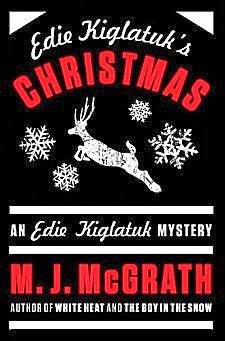 Synopsis: "Days before Christmas in the vast Arctic landscape of Ellesmere Island and the sun hasn’t come up for nearly two months. A hunter comes upon a body in the snow: head crusted with frozen blood, bruised fists, half dead. What others might have dismissed as a case of drunken misadventure, sometime-detective Edie Kiglatuk sees as a fight turned fatal.

When the battered victim doesn’t pull through, the alleged culprit goes into hiding and the victim’s three-year-old daughter goes missing with him. Since Edie has strong personal ties to the killer, it’s up to her to find him before a rifle-slinging search party beats her to it, taking justice into their own hands.

A stunning short mystery with a magical and heart-rending twist, Edie Kiglatuk's Christmas includes excerpts from the first two novels in the series, White Heat and The Boy in the Snow." 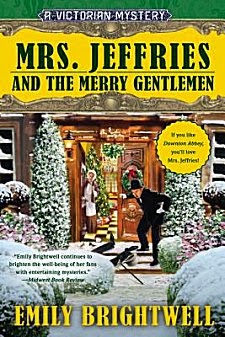 Synopsis: "Orlando Edison is a stockbroker using London’s infatuation with foreign mining ventures to make a fortune. He has curried favor with the nation’s most respected aristocrats, even inviting three of the most influential investors in England—known as the Merry Gentlemen—to be part of his latest enterprise.

Despite his mysterious past, Edison is now welcomed in the highest circles and moves with ease among the rich and powerful. Yet a few days before Christmas, he is found sprawled across his doorstep, murdered. Charismatic and charming, Edison was kind to his servants and generous with his friends. Why would someone want him dead?

Inspector Witherspoon and his household are all looking forward to the festive season. Witherspoon is eager to spend time with his godchild. Wiggins, the footman, is infatuated with football and would rather cheer goals than chase down clues. And Mrs. Goodge longs to bake recipes from the latest cookbooks. But they all know their duty, and led by the intrepid Mrs. Jeffries, they plan to see justice served for the holidays…." 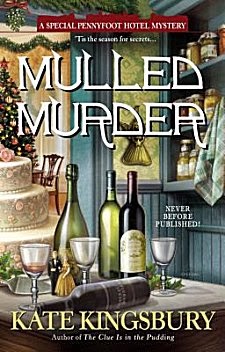 Synopsis: "With one of her housemaids leaving to get married, Cecily Sinclair Baxter wants nothing more for Christmas than some good help. Instead of visions of sugar plums, she’s calling the plumber to deal with flooded bathrooms. Then there’s the surly new janitor, who acts like he got coal in his stocking.

But as Cecily scrambles to hire and train new staff in time for the holidays, one of her guests is beyond help. Gerald Evans is found stabbed to death on the beach, and Cecily soon discovers he was a private investigator from London looking into dark doings involving the Pennyfoot. Who among the staff or guests was being pursued, and what secret drove that person to cold-blooded murder?" 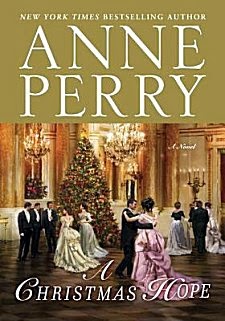 Synopsis: "Although she lacks for nothing, Claudine Burroughs dreads the holiday season for forcing her to face how empty her life has become. She no longer expects closeness with her coldly ambitious husband, and she has nothing in common with their circle of wealthy, status-minded friends. The only time she is remotely happy is when she volunteers at a woman’s clinic—a job her husband strongly disapproves of. Then, at a glittering yuletide gala, she meets the charming poet Dai Tregarron and finds her spirits lifted. But scarcely an hour later, the charismatic Dai is enmeshed in a nightmare—accused of killing a young streetwalker who had been smuggled into the party.

Even though she suspects that an upper-class clique is quickly closing ranks to protect the real killer, Claudine vows to do her utmost for Dai. But it seems that hypocritical London society would rather send an innocent poet to the gallows than expose the shocking truth about one of their own.

Nevertheless, it’s the season of miracles and Claudine finally sees a glimmer of hope—not only for Dai but for a young woman she befriends who is teetering on the brink of a lifetime of unhappiness. Anne Perry’s heartwarming new holiday novel is a celebration of courage, faith, and love for all seasons." 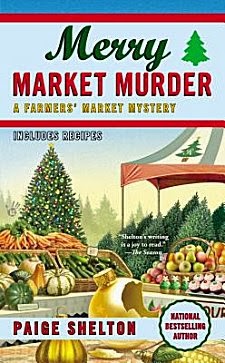 Synopsis: "Jam and preserve maker Becca Robins is excited about the extra business that the Ridgeway Christmas Tree Farm is bringing to the market this holiday season. But when a competing tree farmer, Reggie Stuckey, arrives with a truck full of trees, angrily barking that he has exclusive selling rights at the market, Becca finds herself pining for more goodwill toward men.

After Reggie is found with a tree stake in his chest, she wonders when the Christmas tree business turned so deadly. Now Becca has to use the only clues she has to the killer’s identity—mysterious ornaments that begin to show up in her stall—to hook a sinister Scrooge who will go to any lengths to drive home a point…" 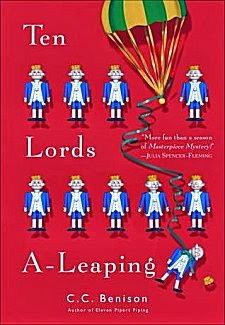 Synopsis: "Although Father Tom Christmas serves his little church in enchanting Thornford Regis with a glad and faithful heart, he never expects to find himself skydiving to raise money for it. Nor, safely back on the ground, to see two of the other divers leap from the plane, then tangle in a midair punch-up and begin falling to the earth.

To say that there is tension between the men in question—Oliver, the 7th Marquess of Morborne, and his brother-in-law Hector, the 10th Earl of Fairhaven—would be an understatement. But the trouble among this ancient landed family really began a generation ago, when a marquess divorced his first spouse to marry his brother’s wife, fathering in his two marriages a viper’s nest of arrogant young aristocrats. Now they have all turned up for the show to witness this shocking event in the sky.

Thankfully the men land safely, but death will not be slighted. Much to Father Tom’s dismay, he later discovers Lord Morborne lying deceased on castle grounds. Rumors of bigamy, art forgeries, and upstairs/downstairs intrigue fly. So do whispers of unvicarly behavior between Tom and Oliver’s beautiful half-sister, Lady Lucinda. In fact, the vicar may be headed for a very hard landing of his own.

C. C. Benison gives a virtuoso performance in this gripping new puzzle, a compelling and wise holiday mystery with the irresistible allure of hot tea and warm scones on a cold winter’s day."

Hmmm... I feel a reading spell coming on! How about you?