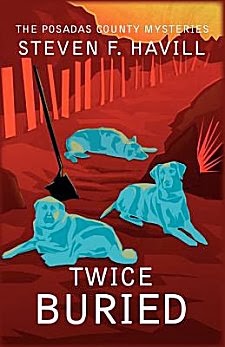 Unfortunately, by the time Undersheriff Bill Gastner could get there, 86-year-old Anna Hocking was lying dead at the bottom of her cellar stairs. Gastner doesn't think her fall was an accident, just like he knows there's a good reason why elderly Reuben Fuentes has started carrying a gun after his three dogs were poisoned. When two more bodies turn up on Reuben's property and the local gossip mill goes into hyperdrive, Gastner knows he needs some help. Putting in a call to his former deputy (and Reuben's niece), Gastner will not rest until the real killer is found.

I know of readers who have a tendency to think that slender books can't possibly be as good as thick ones. Don't make that mistake with Steven F. Havill's Posadas County mystery series. Each book packs a big punch with a real feel for rural New Mexico, an engrossing mystery, and some of the best characters you'll find anywhere. Twice Buried can easily be read as a standalone. For that matter, the series itself doesn't necessarily need to be read in order, but I recommend that you do so-- especially if you're a reader who loves excellent characterization. The personal relationships between the characters grow and change as time passes, and too much of that would be lost if you read at random.

At first the plot of Twice Buried has such a wide focus that it's difficult to connect the dots, but Havill takes closer and closer aim until I realized that there was only one solution that made sense-- a bit like Undersheriff Bill Gastner himself. Speaking of Gastner, he's one lawman I'd want to have on my side. His strengths are compassion, tenacity, and insomnia, and in his hands they're unbeatable. When Gastner calls for help with the unattended death at Anna Hocking's house, he is faced with an eager young reporter wanting to make a name for herself. How he deals with her says a lot about Gastner as a person and Havill as a writer:

"But there's no foul play, no crime. It's just an unattended death. The only dignity she has remaining is what we preserve. The public has no rights in there. And we haven't notified any next of kin, so I'd rather no one was in that house who doesn't need to be."


There are many excellent mysteries out there that allow us to see places we've never been to and to solve crimes we'll never have to face. It takes a very special kind of crime fiction writer to do all that and create characters who treat others with true dignity and compassion. Steven F. Havill does just that with his beautifully crafted Posadas County mysteries. Each one is a pleasure to read and experience.