The Candidate: A Luxembourg Thriller by Daniel Pembrey 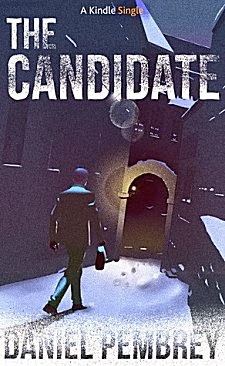 First Line: They were black, croissant-shaped and instantly recognizable to my male brain.

Nick Thorneycroft is a British headhunter working in Luxembourg. His company asks him to recruit an executive for their Russian business who turns out to be intelligent, beautiful, and extremely mysterious. Nick knows how important this recruitment is, but he's having a difficult time focusing. He woke in his apartment with a huge hangover, a pair of women's panties on his floor, a receipt for champagne for two at a local casino, a strange mark on his neck... and absolutely no memory of what happened the night before.  He can't shake the feeling that those missing memories somehow involve the woman he is supposed to hire. But how?

Daniel Pembrey has created an engaging main character in Nick Thorneycroft, and he's placed him in a potentially very dangerous situation. I enjoyed reading how Nick tried to do his job and at the same time piece together clues as to what happened during his blackout. This is a man who suddenly finds himself completely out of his depth, and we get to see how he deals with it.

Pembrey can set a scene, and his pacing is quite good; however, the novella length ultimately hurts his story. There are too many characters, too many motivations, and too few pages. As everything rushed to the conclusion, I felt like a racecar driver who just hit a wall at speed and is left to sit there in a daze, watching a tire bounce down the track and out of sight. As it is, The Candidate is a flawed-- but good-- story that shows a lot of promise. I certainly hope Daniel Pembrey will give writing a full-length novel a try.