The Greenland Breach by Bernard Besson 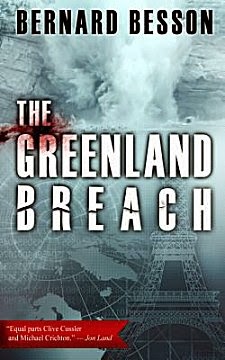 The Arctic ice caps are breaking up, and the wealth that is being uncovered in Greenland has countries all around the globe scrambling for their share. Former French intelligence officer John Spencer Larivière and his two partners in the company known as Fermatown-- karate-trained Eurasian Victoire and computer genius Luc-- are given a freelance assignment that quickly leads them to Greenland, where people will kill for knowledge that could ultimately change the future of humanity.

I have to admit that the main reason why I chose to read this book is that I'm quite the armchair traveler, and I had yet to read a book set in Greenland. I also like to read thrillers with environmental elements to them. Unfortunately, once I'd finished reading The Greenland Breach, I felt the synopsis was the best part of the book.

The two strong elements in the book were its depiction of Greenland and two of the main characters. With the melting of the ice caps, Greenland is seen as a land that's literally coming apart at the seams, and this definitely ratchets up the adrenaline and the suspense. Besson has also created some fascinating characters-- especially Victoire, who has a scene in which she has to escape a killer that's one of the very best in the entire book. The second character that really caught my imagination was Le Guévenec, the ship's captain in Greenland responsible for those all-important ice samples that were to prove so much.

Where the book fell apart for me was in the plot itself. The samples taken from deep within the earth in Greenland that were so important that everyone was willing to kill for them were like carrots to lure the readers into turning the pages. I never did learn what sort of information they held. The story was very slow-moving at first, and when it began to pick up steam, it unraveled into so many confusing fragments that I had a difficult time keeping them straight.

The three partners in Fermatown placed so much confidence in their high tech gadgets that I had to laugh. I'm no computer whiz, but even I could tell they were using too many things that were easily traceable. Larivière was the focus for the majority of the violence in the book, including a truly horrible scene where he is detained in an airport in Greenland. The third member of the Fermatown team, Luc, was supposed to be a computer genius, but he spent much of his time adding unnecessary sex scenes to the book.

Even though I liked the book's setting and two of its characters, it was just not enough. The Greenland Breach was most definitely not my cup of tea.

Thriller
Rating: D+
Source: Purchased as an eBook from Amazon.