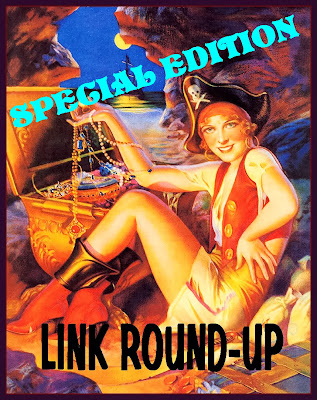 I've always been a bit of a pirate at heart... well, a civilized pirate anyway. I've loved archaeology since I was a nipper, and the thought of buried treasure? Or accidentally stumbling across treasure while walking across a pasture? It's enough to make my toes curl.

The other night I didn't feel like doing what I should've been doing, and instead I found myself in search of treasure on the internet. If I can't find one, at least I can read about others who have.

Then it came to me. I'm not the only one around here who likes treasure. Why not share the links I've found? That's what I'm doing today-- sharing links about folks like you and me finding incredible treasure, and links to archaeologists who are uncovering our past each and every day. If you don't like this sort of thing, the entire post will be easy for you to pass right on by, but if you're a kindred spirit, I hope I've found a link or two that will make your toes curl. (By the way, these stories aren't all from 2013.)

A Few Stories About the Pros...

That's it for this special edition of the link round-up. I hope you enjoyed it! I don't know why, but I have a hankering to watch "Pirates of the Caribbean" now....