@ The Poisoned Pen with Julia Spencer-Fleming! 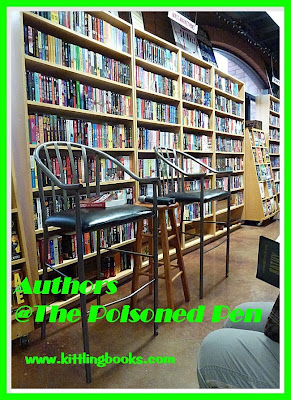 It was early evening on Veteran's Day when I found myself driving the Jeep along the very familiar route to The Poisoned Pen. I had my just-arrived-from-the-UK bright red poppy on my lapel, and I was going to see one of my favorite authors, Julia Spencer-Fleming.

First I had to navigate through all the drivers who seemed to have left their brains behind at their workplaces. Ever had one of those days when you swear your vehicle was covered in bulls'-eyes? Well, that's the kind of fun I had getting to my favorite bookstore!

I hadn't long been ensconced in my preferred seat when one of my Poisoned Pen pals sat down across the aisle, and we were able to natter away the time until host Barbara Peters arrived to introduce the evening's guest.

As Barbara introduced Julia Spencer-Fleming to the crowd, she fixed the author with a steely gaze and said, "She doesn't do a book a year...."

"I just thought you enjoyed torturing your characters!" Barbara quipped.

"I like cliffhangers. It's my belief that if the story moves and the characters evolve, you'll forgive me my cliffhangers," Julia said.

Spencer-Fleming knew from the very beginning that her two characters, Reverend Clare Fergusson and Chief of Police Russ Van Alstyne, would be a couple, but it's taken a few books for them to get there. Peters said, "But Russ's wife...." and Julia jumped in quickly with "Killed her twice!" before mentioning Clare's military service.

Before talking more about her latest book, Through the Evil Days, Spencer-Fleming mentioned that fellow author Rhys Bowen had met her for dinner at the Valley Ho before the event. "That has to be the best named hotel in all of America!" Julia laughed.

When her friends learned that Clare is pregnant in this latest book, several of them told Julia that she couldn't have a character in that condition... not that she listened. And what about the other main character? Russ doesn't want the pregnancy either, which led to Julia's sharing some personal history with us.

When their first baby was eight months old, she told her husband, Ross, that she was pregnant again. "Give me a second," Ross said. He went outside and sat in the car where he smoked for about 45 minutes before he came back in and told Julia, "Oh, that's wonderful, honey!"

Through the Evil Days involves a young girl who's a recent liver donee. She's been abducted, and without her anti-rejection drugs, she will die if she's not found quickly. Julia told us that she specifically wanted the element of time pressure in the book. Barbara commented, "There's a vivid arson scene at the beginning of the book. What sort of research did you do?" to which Spencer-Fleming replied, "I've actually committed arson." Looking back at the camera recording this event, Peters said, "Watch out, this is a live feed!" We all laughed when Julia told us that the extent of her research was watching videos on YouTube.

Hid From Our Eyes

We moved back to the previous novel so no one would be tempted to give anything away in this newest book that would spoil it for others. One Was a Soldier has eight point-of-view characters-- a challenge to write-- and basically asks the question: What happens when soldiers come home from war? After writing such a sprawling novel, Spencer-Fleming wanted to create something more intimate, which is what she did with Through the Evil Days, a novel that is really about just two couples.

Julia realizes that she tends to write novels in pairs; a novel taking place in winter is usually more serious while the next one in summer will be more humorous.

Through the Evil Days is very weather specific, and is a book in which the author could use many of her experiences during the great New England ice storm of 1998. In the aftermath of that storm, three million people were without power-- many in the remoter areas for weeks. During this storm, Julia had a six-year-old and a four-year-old, and the family was living in a 200-year-old house that had a wood stove. Her children thought it was great fun to go outside and smash ice with a hammer, but that broken ice had to be brought inside and melted to provide water to flush the toilets. Her family lived like that for nine days.

Barbara Peters asked, "You've now written eight books. Do you have plans to do anything different?"

Julia told us that she's under contract for ten books, and is currently writing book nine, which has the working title Hid From Our Eyes, and has just reached the stage where it's getting interesting. 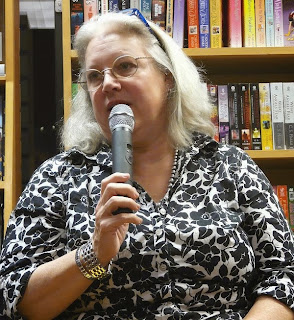 Spencer-Fleming then old us a bit about the history of the area in which the books are set. Millers Kill is roughly in the area of Lake Luzerne and is based on the town of Hudson Falls in the farthest northwest corner of Washington County, New York. "If you notice, I mention places like Glens Falls, but I never say a word about Hudson Falls!"

In 1720, Spencer-Fleming's Scots ancestors were given a land grant in the Saratoga area, and she's done quite a bit of research into its history. She was very surprised to learn that, although Benedict Arnold is known in this country simply as a traitor during the Revolutionary War, he was a very remarkable man (which made his betrayal cut even deeper). Arnold was not only a general, he was also an admiral. He built a fleet of ships to stop the British from coming down through Canada and Lake Champlain into what would become the United States. "You probably should do a Millers Kill book that goes back to the French and Indian War," Barbara Peters suggested.

Tourism is now a huge industry in the area, due in part to the fact that the local residents were too poor to tear down all the old buildings and build new. Julia was skyping with Louise Penny just after Penny had finished writing How the Light Gets In. Louise mentioned how many of her fans say they wish they could visit the fictional village of Three Pines. "Gee, Louise," Julia joked, "I can honestly say that no one's ever told me they wished they could drive to Millers Kill!" Then she mentioned to us that this latest book is the first to contain a map.

When Julia Spencer-Fleming was first published, there were comparisons made between her books and those of Margaret Coel's, although Coel is taking her characters in a different direction. "That probably has a lot to do with the fact that one of her characters is a Jesuit priest!" Peters remarked. She then added, "Not many writers marry off their characters because they say marriage would put an end to the conflict. I have only one thing to say: Marriage... an end of conflict? Hello?!?" I think you could tell which members of the audience were married by how loudly they laughed.

Julia began writing as a hobby, as something to do. She'd spent five years as a stay-at-home mother, and when both of her children were in pre-school, she found herself with four mornings of freedom each week. She joined an online science fiction writing group, thinking, "It'll be a fun hobby like canning or needlepoint." She wrote half of a SciFi novel and shopped it at a large writers conference. She was told, "Your prose are good; your characters are good; but your ideas of science fiction are hackneyed, cliched, and unpublishable."

Then Julia realized "when I start thinking of stories, people die, and that's the way my mind works. People who just want puzzles and guns are going to hate my books."

A fan in the audience wanted to know if Julia's theology is the same as her character Clare's. "Very much so," the author replied. "I found it very disheartening to learn that when people were asked what one word they equate with Christianity, the overwhelming response was 'homophobia.' My daughter is gay."

Spencer-Fleming is a very liberal Episcopalian, but she also writes crime fiction. "During service one day, I sat and looked very closely at the processional cross. My first thought was 'You could really do some damage with that!'"