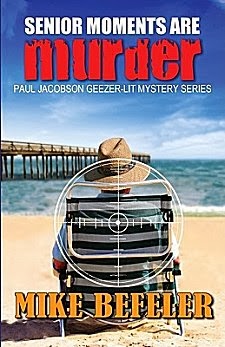 First Line: I awoke with a start. The head of a woman I didn't recognize rested on the pillow next to me.

This is nothing new for octogenarian Paul Jacobson. Don't get me wrong, the man doesn't sleep around, he has short term memory loss. Each night as he sleeps, his mind does a reset, and when he wakes up in the morning, it's literally a brand-new day. Paul doesn't remember a thing.

In this third entry in the Geezer Lit series, Paul and his fiancée are in Venice Beach, California, preparing for their wedding. When Paul decides to take an early morning walk, he discovers a body floating in the canal, and once the police discover that the victim is someone Paul had argued with, the cantankerous old geezer has his hands full getting himself off the Most Wanted list.

The books in this series are, by design, formulaic. The only way Paul Jacobson has of combating his memory loss is to sit down each night and write down the events of the day so he can read them in the morning. To keep on an even keel, Paul has to stick to a regimen-- a formula-- that works for him, and thankfully it's a formula that works for me most of the time. Author Mike Befeler has created a main character who's smart, observant, and usually sees the bright side of life-- but his temper can get him in hot water.

It's easy to care about Paul Jacobson, even though I've never seen a man more prone to tripping over dead bodies. He also has a sharp-witted little granddaughter who loves him to bits and is always willing to help him out of his legal difficulties. You'd think that most police would look at a man in his eighties who has a few mental problems and then move on to the next person on their suspect list, but Paul doesn't have that kind of luck. The fun of these books is watching Paul extricate himself from these difficulties and go on to unmask the killer. There are always plenty of laughs along the way, too.

I think the thing I like the most about this series is that it shows that no matter our age, no matter our physical or mental condition, we are all capable of making a difference. Paul Jacobson may shoot off his mouth at all the wrong times, and he may find too many corpses, but he has a lot to show us about perseverance, and honesty, and humor.