Prey on Patmos by Jeffrey Siger 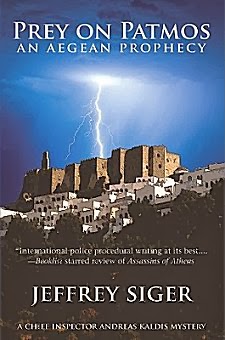 First Line: There was an unnatural cadence to the man's walk.

It is Easter Week, and when a revered monk is murdered in the town square on the holy island of Patmos, Chief Inspector Andreas Kaldis of the Special Crimes Division is called in immediately. His investigation has barely begun when he finds scandal and international intrigues that threaten the very fabric of religion in Greece.

In the third book of this excellent series, Jeffrey Siger has two objectives. One, to show Kaldis's deepening relationship with Lila and their impending parenthood, and two, to show the importance of religion in Greece. He succeeds in both cases.

Kaldis is his normal, acerbic self-- more concerned with putting the bad guys behind bars than he is of being politically correct or of avoiding trampling the feelings of others. But that is his work face and not at all the way his relationship is with the woman he loves. Lila is smart, rich, cosmopolitan, beautiful... and deeply in love with Andreas. The only cloud on the horizon is Kaldis's reluctance to make their partnership a formal one. Watching these two work this out is alternately touching, funny, and downright sexy.

The tougher of Siger's two assignments is showing how important religion is to Greece through the chief inspector's murder investigation. Saint John wrote the Book of Revelation over 1900 years ago in a cave on Patmos, and to this day the Greek Orthodox Church plays a huge role in the lives of the Greek people. I found the entire situation with Turkey, Russia and Greece to be fascinating-- as well as how it could affect monastic life on such a small island.

Jeffrey Siger continues to enthrall me with his savvy characters and his interpretations of life in an ancient and vibrant country. I highly recommend this series.