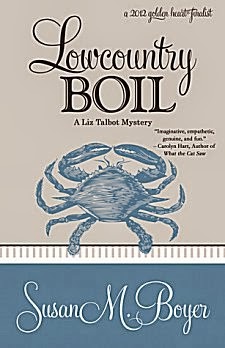 First Line: The dead are patient.

When her beloved grandmother is killed and Liz Talbot inherits her estate, the thirtysomething private investigator moves back to Stella Maris, an island off the South Carolina coast. Her grandmother's death is considered to be an accident and her brother the sheriff tells her to let it be, but Liz has no intentions of doing so. With her Golden Retriever, Rhett, riding shotgun, she reopens the case and discovers that her life-- as well as the lives of others-- rests on her ability to find a killer.

Used to be, I'd never read any of the prefaces, introductions, or acknowledgements at the beginning of the books I read; I'd skip straight to chapter one and dive in. I've since learned that it's a good idea to read those things, but I still have one holdout: casts of characters. It's my opinion that if the characters aren't written well enough to differentiate themselves in my mind, no amount of flipping back to that cast list is going to help matters. Does Lowcountry Boil have a cast of characters? Yes, it does. The good news is that all the characters are well-written and did not jumble themselves into a Gordian knot as I read the book.

Liz Talbot is smart, funny, and brave. I liked her style as she went out to investigate her grandmother's death. The only thing that drove me nuts was her constant use of hand sanitizer. It was mentioned so often that whenever Liz touched something and did not whip out the sanitizer, I thought something was wrong. That little detail kept pulling me out of the story, and I hope it's used much less in subsequent books in the series because I do intend to read them.

The ghostly presence of her childhood friend, Colleen, was well- (not over-) done, and I liked the idea that Colleen could actually have an effect on the events around her. Moreover, Boyer's sense of humor comes to play with characters like Liz's mother, who believes that life's little problems can be put to rights with a bit of lipstick.

The South Carolina setting is superb. The author's descriptions are vivid, and I didn't realize how claustrophobic the island was until Liz drove to Charleston. That takes skill, and I look forward to more stories set in this locale.

If the book has a weakness, it is the plot. The reason for all the deaths seems almost commonplace to any true crime fiction fan, and the plot never had the edge, the sense of urgency, it needed to transform it into a true page-turner. Be that as it may, there's still an awful lot to like about Lowcountry Boil. Susan Boyer has hit the jackpot with her characters and her setting, and I'm looking forward to seeing what sort of trouble Liz Talbot gets herself into next.