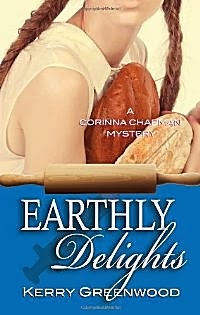 Corinna Chapman may wonder who invented four a.m., but she's the one who gave up her high-profile life as an accountant and banker, walked away from a very unpleasant husband, and decided to follow her heart. Her heart told her to open Earthly Delights, a bakery in Melbourne, Australia, and we all know that bakers have to get that bread in the oven early.

Although Corinna's content with her life, the fates seem destined to try to change that. A junkie almost dies on her doorstep. Other junkies are dying all over town. Graffiti is being sprayed on businesses owned by females in the area. Tenants in her apartment building are receiving threatening letters, and the daughter of one of her neighbors has gone missing. If life is to return to normal, Corinna is going to have to do some investigating of her own once that bread comes out of the ovens.

Having already sampled and enjoyed Greenwood's Phryne Fisher series, I looked forward to this book with anticipation, but found Earthly Delights to be very uneven. I loved the setting in Corinna's bakery, the descriptions of bread making, and the creation of new recipes for muffins and the like. Corinna's eccentric neighbors in the very unusual Roman-style apartment complex known as Insula were also interesting and brought a lot to the story what few times they appeared. The only real exception to this list of secondary characters was Jase the homeless boy, who did share the spotlight with Corinna more. Jase's skill in experimenting with food and his growing relationship with Corinna really lit up the book. Also, the feeling of contentment and well-being whenever Corinna talked about the life she'd made for herself was a plus. However, there were a couple of things that really dulled my enjoyment.

The only real Australian flavor in the book comes from an occasional slang term like "arvo" ("afternoon") and too many Australian political references at the beginning that meant absolutely nothing to me. There wasn't that much investigating done either-- partly as a result of Corinna's being tied to the bakery for long periods of time. The identities of the perpetrators in the subplots were rather easily guessed as well. This first book reads more like a character study of Corinna and her romance with a handsome stranger named Daniel. Perhaps it was because Corinna was so satisfied with her life, but Earthly Delights lacked any sort of real spark to engage me enough to continue with the series.