Calling Out for You by Karin Fossum 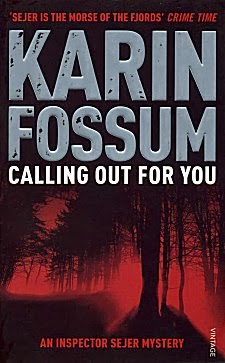 First Line: The silence is shattered by the barking of a dog.

Fiftysomething bachelor Gunder Jomann has worked hard and never taken a risk his entire life. The entire village of Elvestad is shocked when he travels to India for two weeks, but when he returns and tells people that he got married there, the village is almost stunned into silence. On the day Gunder's Indian bride is scheduled to arrive, the battered body of a woman is found in a meadow on the outskirts of town, and it is up to Inspector Konrad Sejer to probe deeply into a village's secrets to identify the woman and to find the killer.

To my chagrin,  I discovered it has been four years since I last read a book written by Karin Fossum. That is much too long a time between books. Fossum's Inspector Sejer is one of the best detectives in all of crime fiction, and I was reminded of this time and again as I read Calling Out for You.

The mystery is an engrossing one, and it takes Sejer quite a lot of patient teasing out of facts before he can even begin piecing things together. Too many people have secrets in Elvestad. Too many villagers believe that there's no way any of them could brutally beat a woman to death. And since no one could possibly have done anything wrong, there's no need to tell the police of the odd thing they happened to see the evening of the murder. It's an ironic fact of village life: live in one and your life seems like an open book, but it is possible to keep secrets all the same.

As rock solid as the mystery is, it is the power of Fossum's characterizations that pull this reader down into her story. The solid, dependable simplicity of Gunder Jomann and the sheer strength of his longing seep deep down into your awareness. The steadfast, cheerful, loving personality of Poona Bai is absolutely perfect for Gunder. Love has come to two very unlikely people, and I couldn't be happier for them. Fossum brought Poona to life in a few short pages, and what ultimately happens is heartbreaking.

It takes a detective like Inspector Konrad Sejer to solve this case. From the very first book in this series, I've admired Sejer because he listens to everyone. In solving murders, everyone is of value, and Sejer tends to rely on people that everyone else tends to ignore-- the old, the developmentally disabled, the homeless.... Sejer has a tender side that we are allowed to glimpse-- from the steadily declining health of his beloved old dog to his instructions to his team about the disposition of the murdered woman's belongings. This man has been on the job for a long time, but it hasn't knocked the compassion out of him. In many ways if I found myself living out life as a member of a homicide team, I'd want to be a member of Sejer's.

If you love tightly plotted mysteries that aren't always neatly tied up by book's end, if you love rich character studies that stay with you long after you've finished reading the book, if you love police procedurals with heart, I have a suggestion. Karin Fossum's Inspector Konrad Sejer series. It's marvelous.

Calling Out for You (APA The Indian Bride) by Karin Fossum
Translated from the Norwegian by Charlotte Barslund
ISBN: 9780099474661
Vintage Books © 2006
Paperback, 400 pages