Death of a Nightingale by Lene Kaaberbøl and Agnete Friis 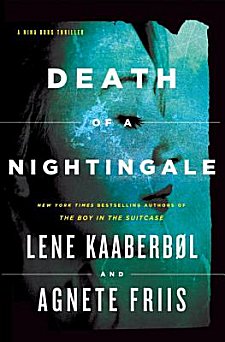 Natasha Doroshenko has been convicted of the attempted murder of her Danish fiancé. On her way to an interrogation at police headquarters in Copenhagen, she escapes police custody, and that night the forzen, tortured body of her fiancé is found in a car. The young Ukrainian woman had earlier lost her husband in the exact same way, so-- fearing the worst-- the Danish police are dedicated to finding her. There's one person law enforcement should pay attention to: Danish Red Cross nurse Nina Borg.

Nina has been following Natasha's case for quite some time-- ever since the woman took refuge at the crisis center where Nina works. Nina had tried to help Natasha leave her abusive fiancé more than once and simply cannot see her as a cold-blooded killer, but there's one thing that Nina is certain of: Natasha is going nowhere without her daughter, and Katerina is in Nina's fiercely protective care. As Nina fights to keep a little girl safe, she learns that Natasha's past contains a secret that goes all the way back to a terrible famine in Stalinist Russia in 1934. There is a third woman involved in this mystery... and she is the one who's determined to keep that secret at all cost.

Nina Borg is a fascinating character who can make a reader feel strong and conflicting emotions. Her work for the Danish Red Cross is her mission in life. She is compelled to save the world through every single person she helps. She is a person to be admired for her strength, determination, and protective instincts. But that very same zeal has come at a great price. By focusing on the care of strangers, in this third book in the series Nina has lost her husband and children, who have given up demanding-- at the very least-- equal billing with her work. Nina is in sad shape, made all the sadder by the fact that it is all her own doing. Her working life may be a cause for admiration, but her personal life is reason for exasperation.

As she fights to keep little Katerina safe, she does find time to reflect on her actions and their consequences. Her soul searching is unflinching and brutally honest. Nina knows what she's done wrong, and she doesn't know if she's capable of making the necessary changes to get her family back-- or even if there's a chance of reconciliation at all. This is a wonderful, nuanced characterization that I've come to love in this series of books.

But Nina is not the only fierce soul in this book. Natasha Doroshenko can match her stride for determined, unflagging stride. Natasha's life has often been a nightmare, and she has learned to be ruthless and cunning in order to survive. As the story alternates between present-day Denmark and 1930s Russia, the reader learns how people's behavior is often shaped by events in the past. The Russian chapters are chilling and horrific, and as the story unfolds, we not only learn about the distant past, we learn about Natasha's life with her husband, a man who was paid for keeping secrets.

With differing timelines and characters' stories, Death of a Nightingale can be a bit confusing occasionally, but everything is woven together satisfactorily before book's end. Once again, Lene Kaaberbøl and Agnete Friis have constructed an emotional roller coaster ride peopled by characters of marvelous depth and nuance. With Nina in such a state, I'm certainly looking forward to the next book in this series to see how she progresses.

Death of a Nightingale by Lene Kaaberbøl and Agnete Friis
Translated from the Danish by Elisabeth Dyssegaard
ISBN: 9781616953041
Soho Crime © 2013
Hardcover, 368 pages