The Sleeping and the Dead by Jeff Crook 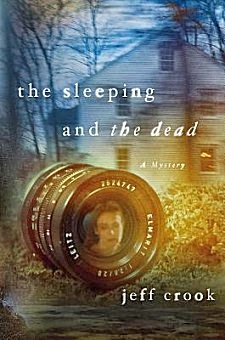 First Line: I sat at the deepest corner of the bar away from the door, trying to get the bartender's attention without my hands shaking.

I've been reading so many cozies lately that I thought it was time to head toward the other end of the spectrum. Jeff Crook's The Sleeping and the Dead was just what the doctor ordered.

There's no other way to put it: the main character in this book is a train wreck. Jackie Lyons, former vice detective with the Memphis Police Department, now ekes out a living as a crime scene photographer. She's been served with divorce papers. She's battling narcotics addiction. She's broke, and her apartment has just gone up in flames. Once you've absorbed all that, telling you that she also sees ghosts may barely make your eyebrow raise.

By selling some crime scene photos to a collector, Jackie is able to scrape together the money for a secondhand high-end camera, but when she uses it at the scene of the murder of the Memphis Playhouse Killer's latest victim, Jackie discovers that she's viewing crime scenes from a different perspective. The camera captures spectral images and begins to point her toward clues that the ex-detective in her can't ignore. Is the man she just started dating a killer? Could the Playhouse Killer be someone she knows?

I normally don't enjoy reading about current or reformed addicts, but there are exceptions: Barbara Seranella's Munch Mancini, Ken Bruen's Jack Taylor, and now Jeff Crook's Jackie Lyons. As she visits crime scenes and talks to the police officers she knows, it's obvious that she had a lot of talent as a detective-- or she would have, if drugs hadn't sidetracked her. Seeing glimpses of that talent made me a patient reader, willing to tease out wisps of clues throughout the narrative in order to learn what made her so wounded, so defensive, so distrustful. I'm not about to tell you what happened, but the wait is worth it.

There is also a high creep factor in The Sleeping and the Dead. Are the visions Jackie sees late at night actually ghosts or are they drug-induced dreams? And what's up with that camera that takes photos when no one is pushing the button?

There are two mysteries in this novel-- one of the man accused of murdering his wife, the other of the Playhouse Killer. I liked both, and I really enjoyed how the author tied them together in a very unexpected way.

There's a lot to like about Jackie Lyons, and I'm really looking forward to reading more about her in the future.