A Bad Day for Pretty by Sophie Littlefield 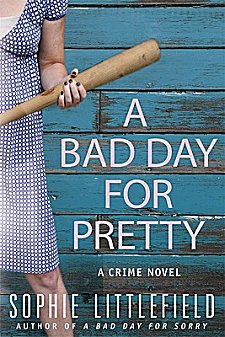 First Line: Mama was already down in the cellar with Gracellen and Patches.

Fifty-something Stella Hardesty may have a sewing machine business that gets the bills paid, but this widow (and former abused wife) has a sideline that means a great deal more. When women come to her who need help with abusive spouses and boyfriends, Stella shows these men the error of their ways-- and sometimes it takes force. She's good at it, but business in that "second job" has been a bit light lately, and Stella's found herself cozying up to Sheriff "Goat" Jones instead.  One night when she and Goat are getting comfortable, a tornado roars through town and drops Goat's estranged wife right on the doorstep. Talk about a mood killer.

Not only has the tornado dumped an unwelcome guest in town, it's also torn down the snack shack at the local demolition derby track, and a woman's body has been discovered. All the circumstantial evidence points to a man Stella believes is innocent, and since she can't cozy up to the sheriff, she decides to prove this man not guilty of murder in the first degree. With a lot of help from Chrissy Shaw who helps out at the sewing shop, Stella aims to solve a crime before an innocent man goes to jail.

I enjoyed the first book in the Stella Hardesty series, A Bad Day for Sorry, but I found this book to be a bit harder getting into. So much of the wit and feistiness that charmed me in that first book is missing here, and it's due to the fact that Stella does a lot of soul-searching. It's necessary introspection because many people who read the first book may not have liked the idea of Stella taking the law into her own hands to rehabilitate abusers whom the law couldn't seem to touch. As Stella works her way through lessons she learned during her childhood and on through memories of her marriage and beyond, readers really get to see the type of person she is. Like I said, this is necessary for our understanding of the character even if it does remove some of the sparkle from the story.

Chrissy Shaw, the young woman who helps Stella in her sewing machine shop, is turning into a fascinating character in her own right. Stella helped Chrissy out of an abusive relationship, and although Chrissy doesn't have much education, she's all natural-born smarts and sharp edges-- a woman to reckon with who's raising her child and working to make better lives for them both. She's also becoming increasingly important in Stella's life.

The crime is a puzzler, but with two women like Stella and Chrissy hard at work to solve it, the killer doesn't have a chance. I'm looking forward to the next book in this series, and I'm hoping there will be less introspection and more smart alecky feistiness.