The Singapore School of Villainy by Shamini Flint 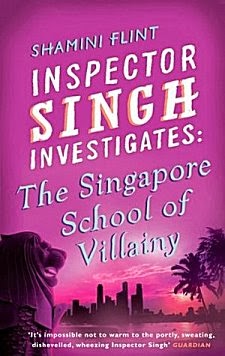 Homicide detective Inspector Singh has been racking up frequent flier miles with his investigations in Bali and Malaysia. Since his superiors prefer him to be elsewhere, they're not exactly jumping for joy when he comes home to Singapore. While he's in the office, the higher ups can't ignore his weight or his failure to dress in the proper uniform or his tendency to conduct an investigation his way-- and when he's home he also can't escape his wife.

When a senior partner at an international law firm is murdered, Singh is thrilled to have a case that will take him out of the office. The suspect list is a long one and consists mostly of the victim's fellow partners. As Singh begins to investigate, he discovers that many of these partners-- as well as the dead man's wife and ex-wife-- are hiding secrets. The turbaned detective is determined to bring the killer to justice, even though his superiors want to sweep the case under the rug. Murder in the international community is bad for Singapore's business, don't you know.

It was a pleasure for me to read a book set on Singh's home turf. Now I know why Singh doesn't mind working away from home: his wife is a mean-spirited, close-minded nag with whom it's impossible to share an opinion, and his superiors are superior in name only, concerned with appearance instead of substance. It's a wonder the man can solve any cases at all. Since he's disliked by his bosses, he's usually given the most inept police officers to aid in his investigations, but in this case, we get to see him work with Corporal Fong, a bright young man on the fast track. It will be interesting to see if Fong figures into future books because he was given an opportunity to learn some valuable lessons from Singh, and I would like to see if he puts any of them to use.

This is a very sensitive case for Flint's main character. Not only does he have his superiors dithering about because the investigation is so high profile, a member of his own family is involved. I think the thing that impressed me most in this book was the bittersweet ending. At the very beginning of the investigation, Singh told Fong that he already knew the identity of the killer. His problem was to find the evidence that would back up his belief. The length of time it takes to find that evidence proves to be quite costly. The Singapore School of Villainy is yet another strong entry in Shamini Flint's engaging series, and I look forward to more.