The Virgin of Small Plains by Nancy Pickard 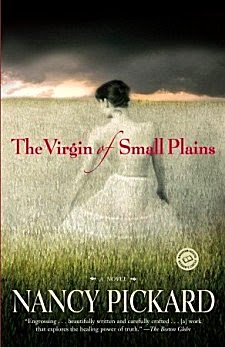 First Line: Abby Reynolds braked her truck on the icy highway, startled by what she imagined she saw off to the side of the road.

Out in a blizzard that swept through Kansas in late January 1987, young Rex Shellenberger is helping his father search for newborn calves when he stumbles upon the naked, frozen body of a beautiful teenage girl. That discovery will change his life and the lives of all those around him.

In the two decades following the never-identified girl's death, locals begin to refer to her as "the Virgin of Small Plains," and stories of miracles are told by those who faithfully tend her grave. Gradually, her legend spreads beyond the confines of the little town.

Seventeen years after her death, Mitch Newquist returns to Small Plains, and all the tensions and secrets that have been buried for so long begin to bubble to the surface. Three families and three friends will be forced to face the consequences of actions taken during that long-ago snowstorm.

The Virgin of Small Plains is the age-old story of the loss of innocence, the loss of trust, the loss of faith. Young Rex Shellenberger found the dead girl, and his friend Mitch Newquist disappeared the very next day-- stirring rumors that Mitch was the killer. Rex never believed those rumors, and neither did his friend (and Mitch's girlfriend) Abby Reynolds. None of the three friends ever recovered from that event, and as Nancy Pickard's tale unfolds, it soon becomes abundantly clear that their fathers-- as sheriff, judge and doctor three of the most powerful men in Small Plains-- know a lot more about that night than they've ever told anyone. Abby Reynolds becomes the catalyst. For seventeen years, she's felt "like a triangle with one side missing," and she's tired of it. She wants answers, she wants closure, and she wants a name and justice for the Virgin of Small Plains. Little does she know that she's about to take a stick to a very large hornet's nest.

What makes this book so good is Pickard's lyrical writing style and her eye for the telling detail. She's created a bit of a romance and a bit of a gothic tale, but it works. Her use of weather to create atmosphere and suspense is top notch, and her characters made themselves at home in my head. I grew up in a small farm town, and I could easily see the events of this book happening there. The only thing that prevents me from giving Pickard's book an all-out rave review is the fact that I put the pieces together very early. But the poetic writing, the setting, and the characters-- including a grey conure named J.D.-- packed such a punch that I really didn't mind the lack of surprise. I have another book by Pickard, The Scent of Rain and Lightning, sitting on my shelf, and I look forward to reading it.