The Messengers of Death by Pierre Magnan 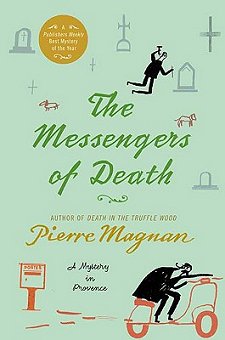 First Line: On the gate of the cemetery at Barles, there's a postbox.

It is a Sunday when ex-postman Émile Pencenat decides to stop digging his own grave for the day and notices that a letter has blown out of the bottomless, purely ornamental postbox. His sense of duty forbids him to ignore the letter, so he walks into the village, buys a stamp, and posts it. Within just a few days, the recipient of the letter is found murdered. The police are baffled, and Commissaire Laviolette is persuaded to come out of retirement long enough to solve the case. As Laviolette is soon to learn, this is only the beginning of the deadly correspondence.

Originally published in French in 1986, The Messengers of Death tells the tale of a series of crimes that occur in the 1960s. Pierre Magnan skillfully takes readers back to what seems a quaint and simpler time in the countryside of southeastern France.

Over his long career, Commissaire Laviolette has learned a great deal about the habits of people who live in small villages. He's an observant, intuitive sort of policeman who knows that the postmistress undoubtedly reads the mail that comes in and out, and he also believes that the reason for these crimes lies in the past. When one needs stored memories, where better to go than the local old people's home? His interactions with all the townspeople allows Magnan to show their foibles to perfection.

Another area in which the author excels is in using the setting and the weather to affect the mood and to create tension and suspense. In more than one scene, the killer is moving through the rooms in the victim's home, and Magnan had the hair standing on the back of my neck. (If I'd been reading late at night, I would have jumped a mile if a floorboard had creaked.)

I know that some readers worry about translated books, but I had no problems with it at all. I slid easily into the story and quickly became so intrigued that I had to know how it ended. At times throughout the book, I had to smile. Each woman's appearance and sex appeal are speculated upon in a manner that did not offend me in the slightest but made me wonder if Magnan had been a bit of a ladies' man. This book is not only an enjoyable mystery, it also oozes French charm and wit. Do I recommend Pierre Magnan's books? Bien sûr!