A Royal Pain by Rhys Bowen 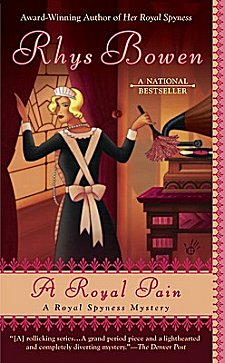 The alarm clock woke me this morning at the ungodly hour of eight.


The Queen of England has done it again. Lady Georgiana Rannoch, thirty-fourth in line to the throne and so broke that she sneaks around London cleaning houses to earn some cash, has been given an assignment. Princess Hannelore of Bavaria is in town with her chaperone and maid, and Georgie has to accommodate them in Rannoch House.

This isn't a cut-and-dried tour guide/chaperone package: the young princess is fresh out of convent school, speaks gangsterese from watching too many American films, and she's not just boy crazy, she's boy ravenous. Hannelore's flirt switch is flipped any time someone of the male persuasion comes within half a block. Her German chaperone is a gluttonous grump, and the non-English speaking maid flits around in the shadows like a bat. Georgie is supposed to control the trio and-- to fulfill the Queen's second objective-- make sure Princess Hannelore is shown off in front of the Prince of Wales often enough to ensure his abandonment of Wallis Simpson. When Georgie and Hannelore stumble upon a body in a bookshop, it's enough to turn this whole assignment into a fiasco.  Being in line for the throne isn't all it's cracked up to be!

I love the wit and wisdom in this series. Amidst all the laugh-inducing lines and scenes, Bowen gives her readers a real sense of England in the 1930s. I'm not just talking about the Queen trying to steer her son away from the horrifyingly unsuitable American divorcée either. The cars, the clothes, the attitudes, the lingering effects of World War I,  Communism, the rise of the Nazi Party... it's all here, wrapped up in a romp of a book (and series) that Bowen has to love writing.

Readers also get a glimpse into the life of the royals from meals to telephones to acquiring antiques. Georgie is such a fun main character. She's been brought up, not to be useful, but to be "thirty-fourth in line to the throne." Nevertheless she's twenty-two and wants her independence from the drafty ancestral castle in Scotland, so she's learning how to cope in London on very little money. She may have been raised to be ornamental, but she's got a good head on her shoulders and thinks on her feet-- which is a good thing because between her own proclivities and those of the Queen, she finds herself in some amazing situations.

Georgie's not the only character who shines. Her glamorous actress mother who left that castle years ago for a procession of handsome and wealthy men slinks through her scenes oozing sex appeal and style. Her retired policeman grandfather is a treat as is his next-door neighbor Mrs. Hetty Huggins, a woman who never met an H she couldn't drop. And then there's that incredibly handsome (and penniless) Darcy O'Mara who makes Georgie's heart flutter and always seems to be around when he's needed most. Although I don't care much for romance in my mysteries, I have to admit that I like keeping an eye on this relationship.

If you're in the mood to have fun, Rhys Bowen's Her Royal Spyness series is the one for you!