@ The Poisoned Pen with Louise Penny! 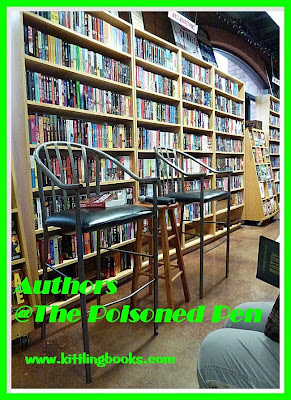 For some reason I didn't expect the streets of Phoenix to be practically deserted on Labor Day. Not that I'm complaining, mind. I was enjoying buzzing along in a light rain shower, going through one green light after another. Yes indeed, I was enjoying the drive; it was just... weird.

Knowing how packed The Poisoned Pen was the last time Louise Penny was in town, I left in plenty of time to have my choice of seats and a chance to browse the shelves. By the time host Barbara Peters arrived, it was a standing room only crowd with more people coming through the doors every minute.

As is often the case, a few folks have recently caused a few problems which have necessitated some rules-- which are clearly posted on the doors. Peters took a few minutes to read them to us, although she did admit that it made her feel like a school teacher. Here they are:

"You would think common sense would prevail!" Barbara exclaimed, but it's obvious that it sometimes doesn't, which is why these rules are now posted. Looking around the crowd, I wondered just how many people had paid attention. From the looks of things, many were trying to catch a glimpse of Louise Penny.

When Louise Penny walked through the crowd, she heard a burst of wild applause and saw a sea of happy faces. This woman has the knack of making all of us feel like cherished family. Sitting down and picking up the microphone, Louise told us that she plans each book tour around The Poisoned Pen because we have the biggest crowds and sell the most books. Looking around the small space, I wondered about the biggest crowd part of that statement, but I did tend to believe the "most books" comment. I'd been watching all the people coming in. For most author signings, people will buy one copy of the new book, once in a while two. Today, I was one of the rare people who'd only purchased one copy of the book. The vast majority had purchased at least two-- and many were holding three and four copies!

Louise stays at the Valley Ho when she's in town for author signings. It's within walking distance of The Poisoned Pen and is a very nice place to stay, "although telling people that I went to the Ho doesn't have quite the ring to it one would like," Penny says with a laugh. The Valley Ho is the hotel Barbara Peters always recommends to authors and publishers planning book tours, but sometimes those publishers insist that they know best. Like the time some publishers in New York were planning a tour for a well-known author. They needed a place that was convenient, and a place from which they could conduct several very important interviews via cell phone. Barbara recommended the Valley Ho, but the publishers went with another choice, and did it so obnoxiously that Barbara didn't say another word. The publishers' choice happened to have no cell phone reception, and those all-important interviews had to be cancelled. (The smile on Peters' face spoke volumes.)

Barbara Peters believes that Louise Penny has reinvented the village mystery, and the room was filled with enthusiastically nodding heads. When choosing a title for this latest book, Penny almost chose a line from one of Ruth's poems (Ruth is a much loved character in this series of books)-- "So far beyond repair"-- but decided that it was much too dark to use. Instead, she chose a line from "Anthem," a poem by Leonard Cohen:

Ring the bells that still can ring,
Forget your perfect offering,
There's a crack in everything.
That's how the light gets in.


The entire book was written with this title in mind.

Barbara told us, "Those of you who have not yet read the book will wonder after you've read the first chapter what in the world is going on. Just keep this in mind: everything will be clear in the end. No peeking!!!" Peters also said that Louise works with a very well-known piece of Canadian history that may not be familiar to everyone. "If you're not my age, you can Google it," she said. "I seldom get up in the morning and think 'I'm so lucky to be this age!' but my age really led to a greater appreciation of the event and the way it's used in How the Light Gets In." 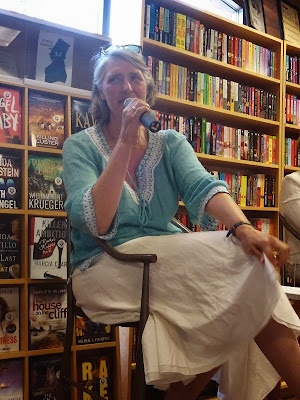 Louise Penny believes it is so very important that characters don't slip into being caricatures, which led someone to mention probably the most popular Three Pines character of them all: Ruth. "Ruth is inside out," Penny says. "We as children begin learning the veneer of being a member of society: obeying the rules, being polite-- and Ruth doesn't have any of that. She can be brutal with the truth. However," she continues with a laugh and a toss of her head, "I don't want to be disabused of thinking you all believe that I'm brilliant and beautiful!"

Barbara Peters then mentioned the fact that some readers have been turned off by story lines not being neatly tied up at the end of each book. "What you have to realize," Peters said, "is that-- starting with The Brutal Telling-- you're really beginning to read a thousand-page novel. Consider each book to be a chapter."

Penny agreed. "Things in life are very seldom ever neatly tied up. The first book [Still Life] did not set each character up completely. By the time you read book nine [How the Light Gets In], I hope you feel an intimacy with  the characters." In Armand Gamache, Louise Penny wanted to create a man whom she felt she could marry, a man who has all the qualities she admires in a man... in a human being. I don't think I'm alone in believing that she's succeeded brilliantly.

Penny then mentioned that her work in progress is The Land God Gave to Cain, which takes place in Quebec, Newfoundland, and Labrador, and that reminded Barbara Peters of a trip to Greenland, in which she was going to buy more of her perfect coffee mugs that show the Lighthouse at the End of the World. When she got there, she was told that the ferry from Nova Scotia had sunk after destroying the terminal, and the shop had not been able to receive any stock. They were completely out of Barbara's mugs. She had to leave without them after arranging that they be shipped to her when the shop finally got them back in stock. Her story in turn reminded Louise of her young gay friend who got a job as captain of the Tinkerbelle-- and this was before he had come out.

It was obvious that no one wanted this time with Louise Penny to end, but we had to bow to the inevitable. It was time for questions.

When asked if she bases her characters on anyone, Louise replied, "The neighbors know that they're fair game!" Barbara Peters smiled and added, "Everyone thinks she's writing fiction when she's really taking dictation!"

Those in the audience who listened to the audiobook versions of Penny's books all seemed to agree that the narrator is Armand Gamache. Louise put her hand to her heart and sighed, "Oh my!" She, too, thinks Ralph Cosham is superb and told us that he'd recently won an award for The Beautiful Mystery.

Another person wanted to know if Penny loves to cook since food can often play an important role in the books. "I'm not a great cook," Penny admits, "but I am a great eater." She normally writes her books in the winter with snow falling outside her window, a fire crackling in the fireplace, the dog lying on the rug, and her husband Michael someplace close by reading or working Sudoku puzzles. She has volumes of poetry and cookbooks there on her desk. When it's time for some marvelous food in Three Pines, Louise opens a cookbook and leafs through it, asking herself "What do I feel like eating today?"

To the person who wanted to know if the author is one of the characters in her books, Penny replied, "I am Clara."

Who writes Ruth's poetry? asked another person. Two women write Ruth's poetry. One is Marilyn Plessner, who self-published her poetry and got to hold the finished book in her hands before she died. "Beyond Repair" is one of Plessner's poems. The other woman is well-known writer Margaret Atwood. And in case you're interested in who coughs up the money for being allowed to use copyrighted materials like poems or lyrics in the books, it's Louise Penny herself.

Louise ended with admitting that there's still so much unresolved in her story that she's afraid something will happen before the next manuscript is finished. She's extra careful; looking both ways before she crosses the street, chewing her food well, etc. You see, she feels that she simply cannot leave her story unfinished. She couldn't do that to her readers, or to her characters.

Louise Penny is, quite simply, a treasure. I wish you all were able to meet and talk with her.