How the Light Gets In by Louise Penny 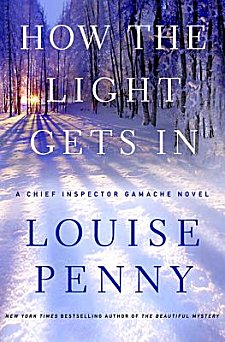 First Line: Audrey Villeneuve knew what she imagined could not possibly be happening.

From the very first line of the very first chapter, the reader is plunged into a nightmare. A woman seems on the verge of madness. Inspector Armand Gamache's well-trained team has been broken apart and sent to many other divisions. Jean-Guy Beauvoir now works for Gamache's superior and is on the verge of falling completely apart. Gamache's team now consists of lackluster men who are openly contemptuous of him. Anyone who has read and loved Louise Penny's books from the beginning will be filled with pain and disbelief during the opening chapters of How the Light Gets In.

It's almost Christmas and Inspector Gamache is looking forward to spending the holidays in Paris with his family when he receives a message from bookstore owner Myrna Landers of Three Pines. A longtime friend of Myrna's has failed to arrive to spend Christmas with her, and Myrna is afraid that something has happened to her. Gamache relishes the chance to get out of the city to investigate. Although Myrna is reluctant to divulge the person's identity, he soon learns that the missing woman was once one of the most famous people in the world. As his investigation continues, the climax of the plot against Gamache grows ever closer. How can one man stand against so many?

As an enthusiast of Louise Penny's writing since her first book, Still Life, I love her continuing story of characters I have grown to know and love like they are my own family. As in real life, these books are not neatly tied up by the last page. One person's story may be woven into a narrative and then not be spoken of until two or three books later. I can see how this would frustrate some readers, but I love the world and the characters Penny has created so much that I am willing to follow wherever she leads. I have come to consider this series as a thousand-page (plus) novel with each book as a chapter. Seen in that light, it is easy to see why I recommend anyone who wants to read these books to read them in order. Read out of sequence, too much context and texture is lost. Would you read a book by choosing chapters at random?

The mystery concerning Myrna's missing friend is a highlight of the book, and I enjoyed how Penny wove a very important part of Canadian history into that story line. However, as much as I love How the Light Gets In, I did feel that there were a couple of holes in the plot. The logistics of setting up highly sophisticated computer terminals in Three Pines didn't quite ring true, and the plot Gamache uncovers concerning some highly placed government officials had my suspension bridge of disbelief strained almost to the point of collapse. Fortunately, I don't read these books for their unwavering technical exactitude. I read them for the luminous quality of Penny's writing, of the multi-faceted characters she has created, and for all the emotions her stories and her characters evoke within me.

If you're the type of reader who does not believe that-- deep down in the very heart of things-- good exists in the world and within the hearts of humankind, you may not enjoy these books. (There's absolutely nothing wrong with feeling that way because there certainly seems to be more proof to the contrary.) How the Light Gets In-- and every other book in this marvelous series-- is about a very eclectic group of people who are at one and the same time the very worst and the very best that they can be. Throughout this series, readers get to watch as each character works at conquering his demons, and it is a process which is both wonderful to read and ultimately life affirming. I eagerly await Louise Penny's next book.