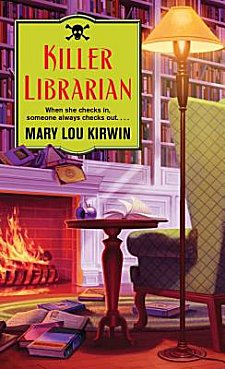 The day of small-town Minnesota librarian Karen Nash's dream trip to England is not the day to have her boyfriend and traveling companion break up with her, but that's exactly what happened. Karen's been anticipating this trip for years, so she goes anyway. Imagine her dismay when she sees boyfriend Dave in line for the plane with a new woman in tow! In shock, she spends the flight thinking of ways to kill the unfaithful man.

In London, she checks into the bed and breakfast in which she and Dave had planned to stay, and goes to the local pub with the owner. Deep into her post-breakup cups, she tells a complete stranger how she was dumped and how she would love to kill Dave. Later that night, she finds another of the guests dead at the B&B, and although the death is blamed on natural causes, Karen thinks the enmities between the guests run a bit to deep for anything "natural" occurring, but she's so thrilled at finally being in London that she doesn't carry through with her suspicions. Enjoying trips to English bookshops and flower shows, it's not until she receives a cryptic message from the man in the pub that she truly begins to wonder what's going on. Did that man really die of natural causes? And did Guy, the man in the pub, take her drunken ramblings about Dave literally? Is Dave going to wind up dead, too?

If you're a cozy mystery reader who likes a lot of romance and a dash of mystery in your cozies, you're going to enjoy this book. Since I'm the type of cozy reader who loves a lot of mystery and very little romance, my enjoyment of Killer Librarian was much more mixed. My favorite parts of the book involved Karen's thrill at being in England and being able to enjoy doing the things she's dreamed about for years. Been there, done that, love to read about others whose dreams have come true-- even when Karen the librarian mistakenly credits Josephine Tey with writing The Tiger in the Smoke when it was Margery Allingham. (I was once a librarian, too.)

Besides the romance-masquerading-as-mystery, I had two problems with this book. One, I'd finished over three-quarters of the book before anything to do with the mystery really kicked into gear. The second was the fact that I never really warmed up to Karen. I can read standalone novels with unlikeable main characters and not bat an eye, but when I read series fiction, I have to feel some sort of affinity with the main character for me to want to continue reading the series. I never felt that while reading Killer Librarian. Every time Karen wished Dave were dead, I flinched. I come from a family who believes that you should watch what you say-- especially things like "I wish he was dead"-- because it's like wishing for your words to come true. That may sound silly to you, but that's the way I feel about it, so Karen always seemed to be "at arm's length" as I read. She's also not the most truthful person in the world, and even though I could see the author's intent, it just didn't work for me because it wasn't in the true vein of unreliable narrators. Karen does redeem herself a bit at the end, seeing that she needs to make changes in order to become the person she wants to be, but for me it was too little, too late.

If you like romance with a hint of mystery, descriptions of a first-time trip to England, and plenty of mentions of books, you should enjoy Mary Lou Kirwin's book. My experience was a bit different, and one that makes me unlikely to read further in the series.