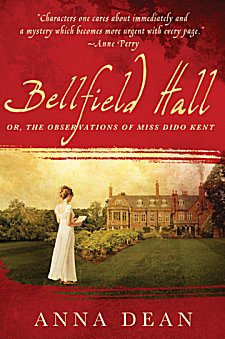 First Line: My dear Eliza, I must begin another letter to you, although it is not six hours since I sent my last.

Richard Montague, son of wealthy landowner Sir Edgar Montague, is about to be married, and an engagement party is being held at Bellfield Hall for him and his fiancée Catherine. Everything is thrown into confusion when-- after a man interrupts the engaged couple during a dance and speaks briefly to Richard-- the young man breaks off his engagement and disappears. Catherine sends for her spinster aunt, Miss Dido Kent, and the woman rushes to her side. Catherine insists that her aunt must find Richard and discover the truth behind his disappearance. It's a tall order, but if anyone can do it, it's Catherine's aunt.

I like historical mysteries. I also tend to gravitate toward book titles that sound like the names of stately homes. And the main character's name-- Miss Dido Kent-- rolls trippingly off my tongue. I had to give this book a try, and I am so glad that I did.

Reading the first pages of Bellfield Hall is like sinking blissfully into a novel written by Jane Austen. The dialogue, the characters, the setting... they all ring true, and not as a slavish Pride and Prejudice knockoff. The character of Miss Dido Kent is a strange and wonderful blend of Jane Austen and Miss Marple. Her letters home to her sister are the perfect means to let readers into her thought processes. In one such letter she states,

Indeed, I begin to think that, terrible though this whole business is, it has at least the advantage of allowing full play to my genius, which I have long considered wasted in the contriving of new gowns and roast mutton dinners out of a small income; and if there was such a profession as Solver of Mysteries, I think I should do as well in it as any man.


As indeed she would. Miss Dido Kent isn't the only draw to this novel. I loved the well-plotted mystery,  the wonderful dry, witty sense of humor, and the feeling of being immersed in Regency England. I'm hoping that Miss Dido Kent's circle of acquaintance is wide enough for her to forsake contriving new gowns and roast mutton dinners on the cheap because I want to read many more books about this Solver of Mysteries.