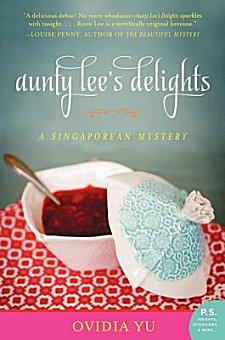 First Line: It was early morning and the rain had stopped.

Not wishing the lifestyle of a rich, idle widow, Rosie Lee is busy making a success of her restaurant, Aunty Lee's Delights. Becoming known in Singapore for its home cooking, Aunty Lee's Delights also plays host to Rosie's stepson Mark's wine-tasting dinners. These dinners bring in a wide range of people-- from local politicians to tourists. The day when a body is found in one of Singapore's tourist resorts and one of the guests doesn't appear for Mark's dinner, Aunty Lee somehow knows that these two events are connected.

"I feel responsible for the people I feed," Aunty Lee tells someone, so when Police Commissioner Raja and Senior Staff Sergeant Salim begin to focus on everyone who attended the wine-tasting dinner that night, she and her trusty companion Nina Balignasay put their considerable talents to finding a killer. After all, it's not that much different from deducing what's "off" in a recipe, is it?

Aunty Lee and Nina are at the very heart of this story, and their characters came to life. Unfortunately everyone else around these two women tend to be stock characters: the bumbling, henpecked husband, the ill-tempered social climbing wife, policemen who have to learn how to do their jobs from an old lady, the smarmy con artist, and so on.

The food descriptions made me want to see if there are any local restaurants featuring the cuisine of Singapore. I was hoping for more local color than the food, but other than very brief descriptions of a resort and some Singapore neighborhoods, there wasn't much. More than anything else, Aunty Lee's Delights reminded me of The No. 1 Ladies' Detective Agency by Alexander McCall Smith, and although there is insight into the traditions and mindset of those living in Singapore, Aunty Lee doesn't quite have the stature of Precious Ramotswe-- at least not in this first book.