The Stonecutter by Camilla Läckberg 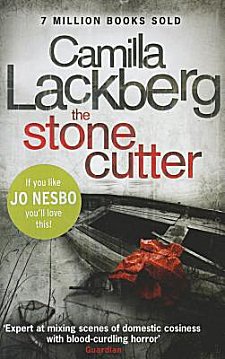 First Line: The lobster fishery was not what it once was.

Detective Patrik Hedström and Erica Falck are celebrating the birth of their first child... or they would be if Erica weren't on such an emotional roller coaster. Patrik loves mother and baby dearly, but lately he's glad that work takes him out of the house-- even if it's the suspicious drowning death of a little girl he and Erica knew well. The more people Patrik interviews, the more clues he puts together, the more he becomes aware of the fact that a long-buried secret is lurking in the fishing village of Fjällbacka, Sweden.

Camilla Läckberg's series featuring Patrik and Erica is a favorite of mine, even when I put the clues together quickly, as I did in this book. The reason for this is the fact that Läckberg has created a book (and a series) that goes well beyond mysteries that must be solved.

The mystery does play an important part in The Stonecutter. The investigation into the death of the little girl is absorbing, and it is interspersed with even more intense chapters concerning a man and wife from several decades in the past. These two separate stories intersect and prove what one character tells another: "I've thought about this, and we can't keep living with a secret. Monsters live in the dark."  Quite scary monsters, as it turns out.

Even though I did deduce the killer's identity quickly, I wasn't put off one little bit. This is because the home life of Patrik and Erica is central to the book. They are intelligent, likable characters that are easy to care about, and often the problems that they are dealing with in their private lives find themselves woven into the ongoing investigations. The theme of coping with motherhood is integral to the book, and Erica as a new mother, has a role to play in the story's outcome. Even Erica's sister, a mother in an abusive relationship, is heard as a faint and troubling chorus in the background.