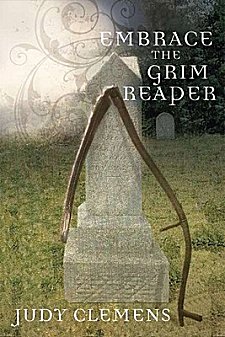 First Line: And then Death turned to her and said, "The only reason I didn't take you that day, Casey, was______"

Casey Maldonado's life explodes, her family is completely destroyed, in one brief flash of fire. No matter how large the settlement from the car manufacturer, it will ever be enough to bring back what really matters to her. Casey sells her house and goes on the road with one companion: Death, who won't take her... and won't leave her alone.

She stops in Clymer, Ohio, a small town about to be given a death blow when its main employer moves to Mexico. But the appliance company's betrayal is not what has the town tied in knots; it's the suicide of a well-known and much loved local single mother. Casey learns that many residents don't believe the verdict of suicide. Death encourages her to investigate, and this wounded and heartsick warrior begins to uncover information that the townspeople are right to be suspicious.

I am a long-time fan of Judy Clemens' other mystery series featuring tattooed dairy farmer Stella Crown, so I looked forward to reading this first in a new series. As I turned the pages, I enjoyed being immersed once more in Clemens' writing style, and I quickly warmed to her main character. Casey Maldonado is an extremely likeable-- and extremely sympathetic-- character. With such a tremendous tragedy in her life, you can't help but want things to turn the corner and start to go well for her. Even though she wants to be left alone to simmer away in her grief, she can't resist checking into the death of this beloved local woman.

Small town setting, pacing, story, characters... they're all good, as I've come to expect from this talented writer. Where the book fails, the responsibility falls on my own shoulders. I think I wanted Death to play a much more prominent role than he does. In this book he is pretty much surplus to requirements, off on the periphery eating a chicken leg, or behaving like a pesky housefly. With such a marginal presence, I found it very difficult to "buy into" Death as a character. What can I say? It's still a well-written story, and it should please most readers. Unfortunately, I'm the reader standing towards the back, with narrowed eyes and a skeptical expression.