A Haunting Dream by Joyce and Jim Lavene 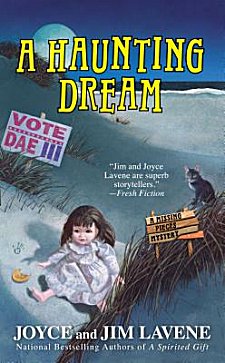 First Line: "Ann? Is that really you?"

In just one moment, Dae O'Donnell's life--which she thought was heading straight into perfection-- went right down the tubes.  Instead of envisioning herself with Kevin, she now gets to see him with his ex-fiancée (and ex-partner in the FBI). The only thing that could possibly bother her more is the sudden change in her gift. Her gift had always been limited to finding lost items, but when she touches a medallion owned by local man Chuck Sparks, she not only sees his murder, she also hears him cry out for help.

Dae doesn't know what to make of what she's seen until she has another vision about a kidnapped girl-- Chuck's little daughter. With a missing child involved, the FBI take over, but they seem to be going about the investigation all wrong, and Dae simply cannot ignore the visions she has of that little girl. Another thing she can't ignore is the fact that the only person who's going to be able to help her find the child is Kevin's ex-fiancée. Life certainly would be much simpler if all she had to deal with was her campaign for re-election.

I've always thought that Dae O'Donnell has one of the best paranormal gifts in all of cozy mysteries. I wouldn't mind having it myself. The next time my husband misplaces something... snap! I find it without having to retrace his steps for him. I also think it would be wonderful to pick up an old item and be able to tell its history. However, in this fourth book in the Missing Pieces series, authors Joyce and Jim Lavene ratchet things up a notch or two by increasing Dae's small gift into something much larger and filled with a sense of foreboding.

The only thing that didn't delight me about this book was the fact that I deduced the whodunit angle too quickly, but that was a very minor annoyance because I enjoy so many other things about this series. Dae O'Donnell is the mayor of Duck, North Carolina (a real town on the Outer Banks). Through her, the authors show what is involved in trying to keep a small town running smoothly-- especially one that has 500 year round residents and 25,000 summer ones. We get to learn about Duck's weather, preparing for hurricanes, and about Duck's sometimes piratical history. Dae's also running for re-election, so readers experience small town politics in action. All this makes Duck a vital piece of what makes this series work so well.

Dae is a very special main character, too. She's bright and funny, and a genuinely caring person. It's painful but enlightening to watch her deal with the arrival of Kevin's ex-fiancée. She's someone you'd want as a friend, and definitely someone you would want on your side in a fight. But that ex-fiancée's arrival is only the first of a one-two punch. To have her safe little "gift" change to such an alarming degree lets us see her even more off balance and fighting to understand what's happening to her. Dae is evolving as a person just as her gift is evolving, and these changes create a nice little cliffhanger that leads right to the next book in the series, A Finder's Fee, which will be released in October. The ending really has me anticipating this next book, and in a way I'm glad I didn't read this book as soon as it was out on the shelves. Now I don't have to wait so long for the next!