A Question of Honor by Charles Todd 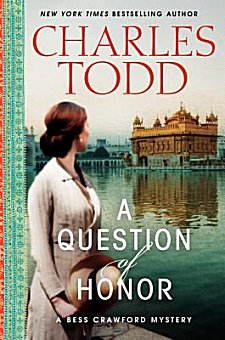 First Line: The letter came for Lieutenant and Mrs. Standish on an afternoon when the heat was at its height, and we had already retired indoors to rest until the evening.

In this fifth book in the series featuring World War I nurse Bess Crawford, the past comes back to haunt her and her family, and we get a glimpse of the Crawfords' lives in India. In 1908 the honor and reputation of Colonel Crawford's regiment was badly tarnished when a murderer was discovered in the ranks. When Lieutenant Wade gets a headstart on the military police who are chasing him, he heads for the incredibly dangerous Afghan border where it's later determined that he died.

Ten years later Bess is working day and night tending to the endless lines of wounded soldiers at the front lines in France when a dying Indian sergeant insists that Wade is alive and serving at the front. If the man is alive, why on earth did he kill three people in a small English village, then return to India to kill his parents before returning to his regiment? Bess uses her infrequent leaves and snatched days here and there when transporting wounded soldiers to England to try to find answers. Not just to satisfy her own curiosity, but also for her father, his pride in his men, and for the regiment. It's a question of honor that Bess will continue to pursue even though someone is willing to kill as many people as it takes to hide the truth.

I first became acquainted with the mother-son writing team known as Charles Todd through their series featuring World War I veteran (and victim of shell shock), Inspector Ian Rutledge. Although that series is excellent, after awhile Rutledge's depression and angst became wearing. In the Bess Crawford series we get to see the horrors of World War I through the eyes of a nurse at the front lines-- someone risking her own life daily in an attempt to save men like Ian Rutledge. This series has continued to get better with each book, and A Question of Honor is the best one yet.

In previous books we've learned bits and pieces about Bess's childhood in India where her father was stationed. Now we get to learn even more with this unsolved murder case from 1908 when she was a teenager. I'm fairly well versed in the topic of nurses at the front during World War I (one book I can't recommend highly enough is Lyn Macdonald's The Roses of No Man's Land), and sometimes I have to forcibly keep my disbelief under tight wraps when reading about this character's travels during war time. I don't think any other nurse throughout the history of mankind could rack up more frequent flier miles than Bess. She always seems to be getting leave or hopping aboard a hospital ship to transport the wounded across the Channel to various hospitals in England. All the other nurses must be green with envy!

That said and out of my system, the mystery in A Question of Honor is the best yet-- and there's the added bonus of Bess's mother having a role in solving it. This series is populated with several secondary characters that I'd love to learn more about. Since Mrs. Crawford steps up to the plate in this book, I'm hoping this paves the way in future books for more to be divulged about Colonel Crawford and Simon.

The plot is a complicated one that must unfold slowly, due in part to so many people denying knowledge of certain events and places because of their traumatic childhoods. In Jacqueline Winspear's Leaving Everything Most Loved, the reader learns about Indian nannies and governesses who were taken to England and then abandoned when the children they were caring for grew up and went to school. In A Question of Honor, we learn what could happen to children whose parents, stationed in India, sent them to England for schooling and to shield them from tropical diseases. Once again, secrets prove deadly, and this latest Bess Crawford mystery proves to be an engrossing read.