The Fame Thief by Timothy Hallinan 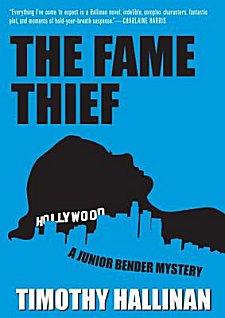 First Line: Irwin Dressler crossed one eye-agonizing plaid leg over the other, leaned back on a white leather couch half the width of the Queen Mary, and said, "Junior, I'm disappointed in you."

It doesn't make one bit of difference that Irwin Dressler-- the mob boss who's been in charge of Hollywood for decades-- is in his nineties. When he tells you to show up for a meeting, you show up (and quake in your boots wondering what you've done to displease him). That's exactly what Junior Bender does. Dressler doesn't waste much time in telling Junior why he's displeased. As far as Dressler is concerned, Junior has one heck of a franchise that he's not making the most of. What franchise? Junior solves crimes for crooks-- and is still alive when the cases are solved. Dressler thinks this franchise has so much potential that he has an investigation that he wants Junior to carry out for him.

Seventy years ago Dolores La Marr was a breathtakingly beautiful movie starlet who was just about to hit the big time when her career was ruined and she disappeared from sight. Dressler thinks La Marr was set up and wants Junior to dig around and find the information needed to prove it. Junior thinks most of the people involved in this crime have long since gone to a lengthy screening in that movie theater in the sky, so there's not much point in investigating. Except for one small detail: Irwin Dressler wants him to do it.  It's not long at all before Junior learns that very deadly things indeed can be hiding under rocks that haven't been touched for seventy years.

In the Author's Note at the back of this book, Hallinan admits, "Writing this book was almost illegally enjoyable. I can only hope it's fun to read, too." It is, as have the other two books in the Junior Bender series. Junior Bender may be a thief, but he's got better morals than most other humans on the planet, he's smart, and his sense of humor will have you laughing time after time. In The Fame Thief, Hallinan gets to dabble in the scandal-ridden glamor of Hollywood, and even if you haven't paid any attention to that city's history, the star power of this part of the story is more than enough to draw you in.

Once you're drawn in, those pages are going to continue to turn because of the bizarre parade of characters that Junior meets during his investigation and because of the situations he gets himself into. (And then there's the matter of trying to put all those puzzle pieces together yourself.) Hallinan is one of the few writers I know who can make me roar with laughter on one page and have me gasping in shock on the next. It has a lot to do with Junior Bender's voice. Even though Junior wishes his name had "a little more swash and a few buckles," his voice with its intelligence, compassion, and bred-in-the-bone irreverent humor lures me in each and every time.

Timothy Hallinan's Junior Bender books are so much fun to read that they're almost illegal. I only hope that there are many more to come.