A Murder in Passing by Mark de Castrique 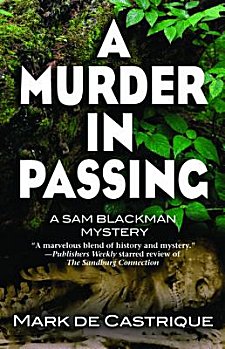 First Line: "So, where are we going?"

It's a legitimate question. The Blackman and Robertson Detective Agency of Asheville, North Carolina has no clients, and the inactivity is driving Sam Blackman nuts. So crazy that he grudgingly agrees to join his business partner and lover Nakayla Robertson on a mushroom hunt on the historic site of The Kingdom of the Happy Land, a freed-slave commune. His search for fungi leads to the discovery of a body, but since The Kingdom of the Happy Land straddles the North Carolina - South Carolina border, the case isn't his and law enforcement tells him in no uncertain terms to keep his hands off.

When Marsha Montgomery comes to Blackman and Robertson wanting the firm's expertise in solving the theft of a rifle and photograph from her mother's house in 1967, Sam smells a set-up. The photo was taken by a renowned photographer in 1932 and shows Marsha's mother, grandmother and great-grandmother on the site of The Kingdom of the Happy Land. Soon thereafter Marsha's 85-year-old grandmother is charged with murder, and Sam has business for his detective agency.

In this fourth outing of Iraqi war veteran Sam Blackman and his partner Nakayla Robertson, Mark de Castrique has done another exemplary job in wrapping a bit of North Carolina history inside an intriguing mystery. The history in this case involves the end of the Civil War and a group of freed slaves looking for a new home. In South Carolina this group was told by other former slaves of a place where mountains stretched for mile after uninhabited mile, a place where freed slaves might be able to find a small piece of land for a home. The group traveled there, and The Kingdom of the Happy Land was born. This bittersweet taste of history blends nicely into a tale of secrets and murder.

The author's characters blend quite nicely into the tale as well. De Castrique's characters are always a strong point in any book he writes (along with a delicious sense of humor that rears its head from time to time). Having lost a leg in Iraq, Sam makes a point of visiting the local veterans' hospital to spend time with patients and to drop off needed items. In A Murder in Passing, he befriends a particularly troubled vet and becomes his mentor, laying the groundwork for a job and housing and getting the young man on the road to a happier life-- and into the mystery.

In reading this book, it's not that difficult to see who must be responsible all those years ago of murdering the man whose remains Blackman found. The problem lies in how it all was accomplished, and de Castrique deals with it in his usual skillful manner. Intriguing plot, characters that draw you right into the story and make you care about them, good pacing... all this combined with humor and subtlety. It probably has as much to do with my upbringing as it does de Castrique's subtlety, but I didn't realize the title of the book had more than one meaning until I'd almost finished it. I look forward to the day when all people can read the title of A Murder in Passing and not see its quiet subtext.