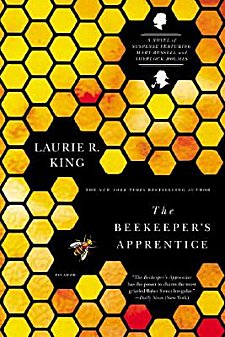 First Line: I was fifteen when I first met Sherlock Holmes, fifteen years old with my nose stuck in a book as I walked the Sussex Downs, and nearly stepped on him.

In 1915, a gawky young girl with her nose in a book stumbled over Sherlock Holmes on the Sussex Downs, and life was forever changed for the both of them. Having retired a few years previously Holmes was not finding the study of honey bees as rewarding as he'd hoped, and bookish, egotistical Mary Russell was like a fierce wind blowing straight out of the Arctic. He sees that she could be a match for him, and she becomes Holmes' protégée, with the approval of both Dr. Watson and Mrs. Hudson.

The Beekeeper's Apprentice tells of the very first cases Holmes and Russell worked together-- scary ones indeed of the kidnap of a little girl, and of a bomber who will stop at nothing to end this new partnership. It works as a mystery to puzzle over, and it works as a character study of two fascinating people. The Beekeeper's Apprentice makes you laugh, it makes you narrow your eyes in suspicion and in thought, and it tugs at your heart strings. Mind and heart, it satisfies on a lot of levels.

This book is one of those that have been recommended to me countless times, and each time, I smiled politely and said that I'd make a note of it. (Well, I did-- a mental note!) I've even had the book sitting on my shelves staring at me balefully each time I walked by. For some reason, I pulled it off the shelf this summer, began to read, and by page 8, I was completely enthralled and utterly unable to stop turning the pages. (Page 8 was the first belly laugh the book got from me.)

I haven't read much of the Sherlock Holmes canon. From what I did read, I enjoyed the intricate plots, but I felt Watson was a twit, Holmes an insufferable know-it-all, and Mrs. Hudson quite possibly the best of the lot, but since she was a woman, she was scarcely mentioned. What Laurie R. King does with these legendary characters is spectacular. She stays true to the time period and true to Conan Doyle, but blows all the dust off these Victorian tales. What would the great Holmes do if confronted with himself in female form?  All you have to do to find out is to read this book.

First published in 1994, The Beekeeper's Apprentice has already been reviewed hundreds (if not thousands) of times while I was stubbornly staying beneath my rock. Now that I'm out in the full light of day, I can tell you that there are a couple of words you'll very seldom ever see me use in a book review. "Enchanted" is one of them-- and I was enchanted by this book. I had to say so on Facebook and on Twitter, and I'm happy to say that I encouraged another book blogger to get her hands on a copy of her very own. We both chirped away quite happily with @mary_russell and discovered that there are two short stories available for eReaders-- "Beekeeping for Beginners" telling of the meeting of Holmes and Russell from Holmes' point of view, and "Mrs. Hudson's Case" in which the housekeeper gets to do a bit of sleuthing on her own-- that are brilliant little glimpses into this marvelous series. Oh yes, I've been busily gathering up all the rest of the books in King's series, and I have yet to make up my mind whether to have a feast, or to savor each book slowly at long intervals.

What do you think?