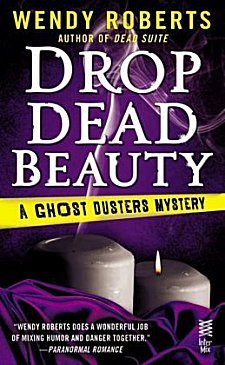 First Line: Sadie bolted upright in bed and squinted into the dark.

With business finally picking up, Sadie needs to build a nest egg while she can. Not only will she be saving for the future, the work will take her mind off her relationship (or lack thereof) with Zack. That entire segment of her life has blown up in her face, and Sadie knows what she must do; she just wishes she didn't have to.

While she's busy lining up clients, Detective Petrovich needs her help. Usually he's the one who saves Sadie's backside, but this time the detective has found himself on the wrong side of a homicide investigation. Someone is framing Petrovich for the murder of his ex-wife, and Sadie's going to check out the luxurious day spa where the crime occurred. In doing so, she makes herself the target of a killer.

You never know quite what to expect from this series, and that's something I've loved about it from book one, The Remains of the Dead. Sadie Novak is one of my favorite characters in crime fiction. Her empathy for the loved ones left behind after a death and her dedication to helping spirits pass on make her the type of person I'd love to have as a friend. She's also hard-working, smart, sassy, and honest in her dealings with clients and friends alike. That honesty is something else I admire about her, and when she finds herself in a sticky romantic situation with two men in her life, she never thinks of lying.

Actually, make that three men in her life because Detective Petrovich is hiding out at her place while giving her advice on how to find out who's trying to pin his ex-wife's murder on him. With all the demanding men in her life and crime scenes to clean up, it's a wonder that Sadie doesn't snap and run screaming out into the night.

One of the things I think is good in a series-- unpredictability-- shows up more than once in Wendy Roberts' Ghost Duster books, and it happens in Drop Dead Beauty. Bad things happen to good people, including the death of characters some readers have grown to love. What some see as an act of betrayal, I see as realistic, and as a chance for the series to evolve. If you're the type of reader who likes learning about how to clean up after the CSI folks are through with a crime scene, and if you like stories with a touch of unpredictability, a ghost or two, a wonderful main character, humor, and a dash of realism, come join me. You're going to love Sadie Novak. (But I suggest you start at the beginning of the series.)