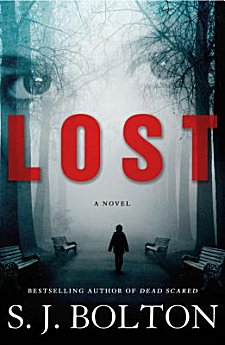 First Line: "They say it's like slicing through warm butter, when you cut into young flesh."

Five pre-adolescent  boys have disappeared in south London in a matter of weeks. They have nothing in common with each other except that their bodies have all been found, drained of blood, on beaches along the River Thames. The media have gone wild, parents have begun keeping a very close eye on their children, and someone named Peter Sweep is taunting everyone online.

No one is keeping as close an eye on things as six friends who are all about the same age as the victims. Among these six friends is a lonely twelve-year-old, Barney Roberts. He has his own reasons for being even more obsessed with the media-dubbed "Twilight Killer" than his friends. He also has an ace up his sleeve that his other friends don't: a next-door neighbor named Lacey Flint. But when the killer starts paying attention to Barney, will Detective Constable Flint be able to piece together the clues before it's too late?

I don't frighten easily, but author S. J. Bolton has scared the bejabbers out of me with her depiction of the River Thames. Under her skilled, tale-spinning pen, this river is a living, breathing entity. It groans. It moves as though there's "something beneath it, pushing to be free." In Bolton's Lacey Flint novels, the Thames deserves to be listed in the cast of characters, and Lost is no exception. The Thames at night provides more than enough chilling atmosphere to have readers jump at the slightest unexpected noise.

There's much more to Lost than atmosphere, which will come as no surprise to anyone who's read one of this author's books. Lacey Flint is still an uncomfortable character. You're never certain which way she's going to jump, and her impulsiveness can be both a blessing and a curse to her fellow officers. This particular case has Detective Inspector Dana Tulloch on a knife's edge, and she begins to behave in ways that shock her team. Flint and Tulloch are an explosive pair when put together, but there's another character who steals the spotlight every chance he can get-- twelve-year-old Barney Roberts.

In recent weeks, Barney has been left to his own devices too often, and he has plenty of time to obsess about this murder investigation of children his own age. It's been a long time since I've read a book that stirs up such a whirlpool of emotions amongst all the characters. Bolton is superb at misdirection. As these people and their behavior become known, there are sound reasons for them all to be the killer. What's fun is to attempt to focus on the character whom you believe is The One. That's what I did, and I found it to be impossible. My choice ebbed and flowed with the tides of clues that the author provides.

A creepy river, a scared and lonely little boy, police officers determined not to lose another child, and a fantastic list of suspects. Once again, S.J. Bolton has given me an emotional and intellectual high. This is an author not to be missed.