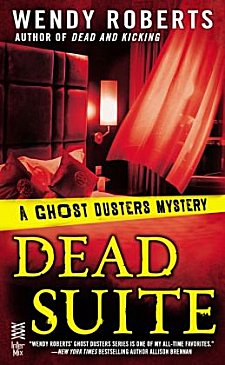 First Lines: For most people, checking into a five-star hotel meant luxury and pillow mints. For Sadie Novak, luxurious accommodation meant blood spatter, maggots, and the occasional ghost. But it paid the bills.

When school teacher Sadie Novak's brother committed suicide, there was no one to clean up the mess. Sadie, in her overwhelming grief and pain, had to do that herself. Vowing that no one else should have to do that after the death of a loved one, Sadie did her research, took all the necessary courses, and began life anew as an unattended death/crime scene cleaner.

When she began her new career she didn't realize that she has a gift that is both blessing and curse: she can see and communicate with ghosts. In many cases she's able to send the spirit on its way, but this new career has also involved her in a few murders. In this fourth installment of the Ghost Dusters series, Sadie's on-again-off-again relationship with former policeman Zack is off. Again. Business is slow, and her mortgage payment is staring her in the face. However, when women start getting killed in expensive hotels, Sadie's back to work. Hopefully she can find the Seattle Slasher before the Seattle Slasher finds her.

I stumbled across this series shortly after the first book, The Remains of the Dead, was published. I fell in love with the premise, the character of Sadie, and the fact that she's not a cat-loving amateur sleuth. Nope, Sadie's pet is a rabbit named Hairy. I can hear you groaning, but as a former rabbit raiser, don't knock 'em unless you've had one as a pet. Besides, who says that Cozy Mystery Rule #17 states that the heroine must own a cat or dog?  Hmmm? I still remember reading that first book because the ending blindsided me. What a shocker! After that I was hooked, and when I couldn't find others, I was sorely disappointed.

Lo and behold, once again I stumbled across Wendy Roberts while looking up book info on Amazon. Evidently her publisher decided future books in the series were to be in eBook format only. I snapped up both new books that are available and dove right into Dead Suite. I was back with a favored character, and I was happy.

Some of the crime scene clean-up details might be a touch too graphic for some, but if you've watched CSI or Bones and not run gagging for the bathroom, Sadie's work shouldn't bother you. To be honest, I find it interesting to learn what all is involved in that sort of work.

The paranormal element in these books is well done. The scenes with ghosts are not overdone and even surprisingly believable. The pacing and story flow smoothly, and Sadie's intelligence, irreverence, and humor are refreshing.

Although it's sad that Roberts' publisher prevents old and new fans who don't have access to eReaders from reading her newest books, I am thrilled that this series has continued. I've missed Sadie, her biohazard suits... and even Hairy.