Behind the Redwood Door by John M. Daniel 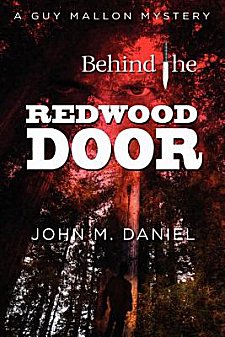 First Line: Just as the sun was coming up on the morning of Friday, June 18, 1999, there was a break in the clouds, and Carol and I went out for a walk along the nature trail by the ocean, down the road from our house.

Guy and Carol Mallon are living an idyllic life in Jefferson City on the northern California coast. A former small press publisher, Guy is unemployed by choice and helps Carol with her business, Scarecrow Books. One evening they're eating dinner with two friends: local newspaper owner River Webster and the paper's editor Pete Thayer. Once romantically linked, the two have broken off their intimate relationship but still remain friends. Thayer leaves the Redwood Door to work on a story. Webster follows almost immediately and finds Pete dead behind the tavern.

Webster asks Guy if he and Carol will run her newspaper as interim editors until she can find a qualified replacement. Reluctantly, the two agree, but with the understanding that there will be no investigative journalism of the type preferred by Thayer-- especially since that's probably what brought about his death. No, under the guidance of the Mallons, the Jefferson Nickel will switch to showcasing some of the local history. But no sooner has Guy taken the reins than things begin to happen. Computers are tampered with, offices are ransacked, and critical computer disks go missing. Why is someone so intent on stopping the publication of the newspaper? It couldn't possibly have anything to do with the local history Guy's been checking into... could it?

This book is one of my favorite types: a perfect blend of history and mystery. The fictional Jefferson City's history is laced with Indians, lost gold, loggers, hippies, and two feuding families. I became so engrossed with the history of the place that I often forgot that I was supposed to be doing a bit of deduction. As a result, the action made the hairs on the back of my neck stand up a time or two, and the ending came as a surprise.

Another aspect of the book that I particularly enjoyed was the relationship between Guy and Carol. Oftentimes the darker mysteries are filled with so much angst that none of the characters should even think of being in a relationship, and the cozier books in the spectrum usually have young females who can't seem to find Mr. Right. It's refreshing to find a married couple who love each other deeply and enjoy each other's company. The author shows that it is possible for characters to be very happy sleuths.

I enjoyed the story as well as the main characters, and I learned something about northern California and the newspaper business, too. Reading Behind the Redwood Door is a definite win-win situation all around.