The Corpse Reader by Antonio Garrido 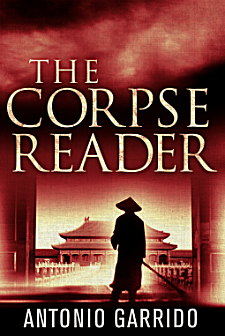 First Line: Shang didn't know death was coming for him until he tasted the blood spurting up into his throat.

In obeyance with custom in 13th century China,  budding forensic investigator Ci Song unwillingly gives up his studies to help his family. After another tragedy strikes, Ci finds himself a fugitive and has no other recourse but to take a job as a lowly gravedigger-- which does allow him to sharpen his skills as a "corpse reader." His abilities make him sought after, and he soon receives a summons from the Imperial Court itself-- a summons that will take every ounce of his corpse reading skill to keep the Emperor-- and Ci himself-- out of danger.

The author did much research on an actual person-- Song Ci, considered the founding father of CSI-style forensic science. Garrido tells us about his research and how he went about writing the book in a section at the end. This section is well worth reading. In fact I would have to say that I probably enjoyed it more than I did the story itself.

I found the villain to be glaringly obvious, but even more than that is the fact that Garrido's main character drove me crazy. As written by the author, Ci is academically brilliant and socially obtuse. For a person who is supposedly as brilliant as he at piecing together the most obscure forensic details, Ci is completely ignorant of the people around him. In addition, each time he's cornered by someone who's unraveled one of his personal secrets, his only reaction is to run-- yet he has the courage to face down the Emperor himself over a small forensic detail?

As you can see, my enjoyment of this book was hampered by two things: (1) my inability to put myself in the time period and cultural beliefs of 13th century China, and (2) my reaction to the main character. Something tells me that if I fell into a time machine and opened the door onto this era in China, I wouldn't last very long. I don't have a feudal "decapitate-first-don't-bother-asking-questions" mentality, and I've always had a problem-- in books and in real life-- with people who are book smart yet have absolutely no common sense.

This book sets you down right in the heart of China 800 years ago. If-- unlike me-- you can be more forgiving of that time period's mindset and of a main character who's almost too naive to live, your mileage will most certainly vary from mine. I sincerely hope it does, and even though everything was not to my liking, I really appreciated a glimpse into the mind of a truly brilliant man, Song Ci.