A Cold Day for Murder by Dana Stabenow 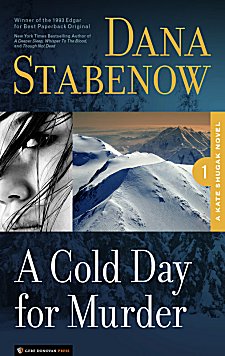 First Line: They came out of the south late that morning on a black-and-silver Ski-doo LT.

Somewhere in the endless acres of "The Park" a ranger has gone missing. No one puts up much of a fuss about it, figuring his body will be uncovered in time for the ground to thaw so he can be buried. But when a detective sent in to look for the missing ranger disappears as well, something has to be done. The Anchorage, Alaska District Attorney's Office sends two men out, hats in hand, to their former investigator, Kate Shugak. Shugak knows The Park because she was born there. She's an Aleut who left her home village in pursuit of education and a career. In reluctantly agreeing to search for the missing men, Kate finds herself being pulled out of her self-imposed exile back to the life she'd left behind.

This slim little volume is a quick read that introduces the reader to two prime objects: the Alaskan wilderness and the prickly character of Kate Shugak. In many ways, I think my reading experience was tempered by the fact that I'd already read Stan Jones' mystery series set in Alaska that also features a Native American main character. If I'd come to Stabenow's book totally fresh, I would have been much more in awe of what I was reading.

Alaska is shown to be the beautiful, wild place that it is; Shugak is the strong, silent type of female that we're still not quite accustomed to; and although the story line didn't hold many surprises for me, I'll be back for more. This is the first book in a very popular series, and Stabenow not only marks her territory, she populates it with a woman I just have to know more about.