Except the Dying by Maureen Jennings 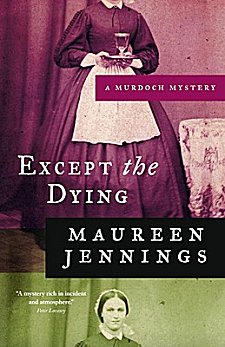 First Line: They started with the boots, which looked new.

It is bitterly cold in Toronto in the winter of 1895, and the nude body of a servant girl has been found frozen in the snow on a deserted path. Acting detective William Murdoch is assigned the case, and he hopes that he can solve it quickly and with distinction. After all, he's been an acting detective for three years, and unless someone is transferred or dies, it looks as though his career is stalled. But the more he investigates, the longer his suspect list becomes-- and the more he has to contend with bigoted superiors on the police force.

I originally read this book because I've become a devoted fan of the Canadian television series based upon Maureen Jennings' work. So many times when I sample a book (or series of books) that has been turned into a television series, my reading pleasure is greatly diminished. That definitely was not the case with Except the Dying. Jennings' historical accuracy and her main character transform what could well have been a conventional murder mystery. While William Murdoch shows himself to be a compassionate man of principles who's still mourning the death of his fiancée, I was also taken with Jennings' turn of phrase-- one woman is described as being "as neat as a nuthatch" and someone else was so hungry he "could eat moss off a rock." The book also opens with a scene that immediately put me in mind of Dickens' A Christmas Carol.

Writing style, main character, historical accuracy... I am so glad that I introduced myself to Maureen Jennings' books. I'll definitely be reading more.