The Golden Calf by Helene Tursten 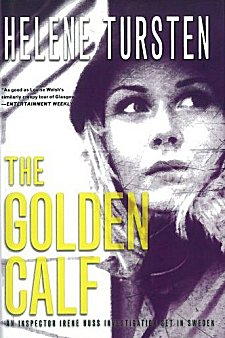 Three men have been shot and killed in one of Göteborg, Sweden's  most fashionable neighborhoods. All three victims have ties to the same woman (Sanna Kaegler-Ceder), but Detective Inspector Irene Huss and her colleagues are still led a merry dance through the world of the rich and shameless because Sanna seems extremely unwilling to talk about what she knows-- even when her life and the life of her infant son are at stake.

When Irene is left to dig through details of the dot-com bubble and how it burst, she also has to deal with the strange behavior of her partner and long-time friend Tommy. Irene suspects that he may be having an affair with someone else on the police force, but she certainly hopes she's wrong.

Helene Tursten's series featuring jiujitsu champion and happily married mother of twin teenage daughters Detective Inspector Irene Huss has become one of my favorite Scandinavian mystery series. As in her other books, The Golden Calf has a plot with more twists and turns than a mountain road high in the Andes, but while you're enjoying a devious storyline, there are always some characters for you to appreciate, too.

In this book, one of the suspects/potential victims, Sanna Kaegler-Ceder, is very memorable indeed. At first, she's so glamorously in shock that the reader is willing to cut her plenty of slack for her behavior. But as more is learned of her past, and when it becomes clear that there is a lot Sanna knows that could dramatically speed up the investigation, the reader's compassion quickly turns to exasperation. Why doesn't she seem to care that the life of her baby is in danger? Why doesn't she even care that her life is in danger, too? Sanna is the catalyst that keeps us reading until everything is revealed.

But Sanna isn't the only memorable character in Helene Tursten's book. Irene Huss herself has kept me returning to this series time and again. She's tall, athletic, and a quiet, observant person who knows when to be forceful. Irene and her husband, Krister, have raised two twin girls who are just about ready to leave the nest. They're both still sane and happily married because of their priorities. Irene is the breadwinner of the family. Krister is an excellent chef who works part-time so the twins can be cared for and the house can run smoothly while Irene is working long hours on murder investigations. Irene and Krister have certain blocks of time each week that they spend just the two of them together, and those times are always greatly anticipated. Many couples should take a page out of their book.

But while Irene's marriage is just as strong as ever, her partner and best friend, Tommy, isn't so lucky. Watching Irene as Tommy's troubles start coming to her attention, as she begins "gathering evidence" before she talks with him, and the final confrontation and its aftermath... watching this long-standing friendship sort itself out through a difficult stretch is every bit as comforting as once again experiencing the love and domesticity of Irene and Krister's marriage.

Helene Tursten knows how to write deftly plotted police procedurals that have characters that live and breathe on the page. Whenever I need a bit of a Scandinavian crime fix, it's always a pleasure to turn to Detective Inspector Irene Huss.