The Beggar's Opera by Peggy Blair 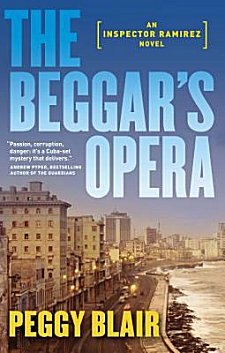 First Line: Ricky Ramirez's parents stood on the other side of the door, speaking in hushed tones with the doctors.

Canadian police detective Mike Ellis has brought his wife to Havana, Cuba, in an attempt to heal his marriage and to heal from the lingering aftereffects of being wounded in a situation in which his partner was killed. Feeling compassion for one of the little boys begging for money along the shore, he gives the youngster a few pesos. When the boy's body is pulled from the sea the next day, witnesses remember Ellis, and he finds himself charged with murder and thrown in jail.

It is up to Inspector Ricardo Ramirez to investigate the murder and find the proof that will put Ellis in front of the firing squad. According to Cuban law, he has only 72 hours to secure the indictment that will prevent a vicious killer from leaving the country. However, Ramirez has other things on his mind-- like the fact that he's dying from the same incurable dementia that killed his grandmother. As Ramirez races against the clock, he is haunted by the ghosts of the victims of his unsolved cases... ghosts that only he can see.

I found this book to be fascinating for its look at present-day Cuba and of Old Havana, a city that used to be one of the world's hubs of prurient delight. Blair incorporates Cuban life under decades of Fidel Castro's rule into her story: the laws, the multitudes of highly educated people who are forced to work menial jobs because there's nothing else available, and-- most of all-- the humor with which so many Cubans leaven their daily lives. For this look at Cuba alone, The Beggar's Opera is a very worthwhile read.

The mystery is also an absorbing one. Although I deduced one of the plot twists, Blair blindsided me with another, and for a mystery reader that's always a happy moment. However, I had a major problem with the book's main character. Inspector Ricardo Ramirez did not set well with me at all. If not for a Canadian lawyer sent down to help Ellis (and who wound up doing most of Ramirez's work for him), Ramirez would've been content to hand in his circumstantial evidence, get his indictment, and send Ellis to the tender ministrations of the firing squad. Did I just give away a major plot point? For crime fiction aficionados, not really. As I said, there are some surprising twists and turns in this plot. What intrigues me is how much of Ramirez's attitude can be attributed to his dementia, and since I really do want to know, I'll be looking forward to the next book in this series. I wouldn't mind a return trip to Havana.