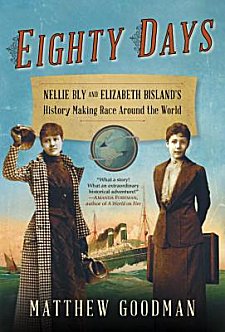 First Line: She was a young woman in a plaid coat and cap, neither tall nor short, dark nor fair, not quite pretty enough to turn a head: the sort of woman who could, if necessary, lose herself in a crowd.

If, like me, you're the type of person who loves reading fascinating history when it's written like the best fiction, you need to get your hands on this book. Joseph Pulitzer needed to do something to increase his newspaper circulation, and he decided to run with an idea pitched to him over a year before. Like Phileas Fogg in Jules Verne's Around the World in Eighty Days, he was sending one of his star reporters on a whirlwind effort to beat Fogg's record.  The reporter he sent was also the person who came up with the idea in the first place: Nellie Bly, a young woman who'd earned her reputation by exposing the horrific treatment of mental patients (by impersonating one and being committed to the institution herself) and by other similar brave and sensational exploits. Nellie had planned everything carefully, and she believed she could make the trip in 75 days. On November 14, 1889, she boarded a ship and set sail across the Atlantic from New York City.

Eight hours later, a rival newspaper sent Elizabeth Bisland west to San Francisco to do the same thing, hopefully in less time. Although both young women had similar backgrounds filled with hardship, their temperaments were very different, and that would make all the difference in how they faced the weather they experienced, the people they met, the scenery they saw... everything that would cross their paths in their race around the world.

Goodman brings both women to life, and even though they are fascinating subjects in and of themselves, what raises this book to an even higher level is the fact that, as we read, we're not only learning about Nellie and Elizabeth, we're experiencing life in the Victorian world. So good is this tale that whenever I had to stop to attend to something else, I had to blink a few times to get myself back into the correct century. I knew who won simply because her name lives on while the other woman's has drifted into obscurity, but that didn't matter. Did I have a personal favorite? I most certainly did. I found myself more drawn to Elizabeth Bisland, the voracious reader who actually seemed to settle down to enjoy her travels and to make the effort to meet people and see some of the countries she was visiting so swiftly. Nellie Bly, on the other hand, was too intent on winning to enjoy much of anything and allowed herself to get tied up in knots whenever it appeared as though she was going to miss a connection. What a sourpuss!

As you can see, I got a bit involved with the book as I read, and that's one of the most enjoyable things about it. Want to leave the stress of this world behind for a while? Want to read about a fascinating era and two beguiling women? Get yourself a copy of Eighty Days!